New Haven '76 represents Elvis' summer tour from 23rd July to August 5th 1976. Many Elvis fans consider this to be Elvis' worst Summer tour (apart from abysmal performances in Late August before things 'improved') The Tour coming straight after the three 'bodyguard' sackings finds Elvis on 'auto pilot' and (mostly) singing the absolute minimum of songs in a lacklustre manner. Therefore why would anyone in their right mind want to listen to this FTD? Illustrated by Steve Barile's liner notes and photos - I quite liked the art work and rate it as 'better than normal' half a dozen pictures and track listing. Elvis' worst performance on FTD to listen to is actually the 'America' FTD representing the April 1976 tour. The BEST sounding soundboard from 1976 is the Tuscaloosa 30.8.76 Show, but that night Elvis was far, FAR from his performing best.

On this 'New Haven' CD we get a 70 minute mono soundboard in really, REALLY good sound!

Not quite as good as Tuscaloosa but pretty good balance all the way through-the back up singers, instruments and Elvis seems even in the mix and clear. So bad was this tour that Elvis only really performed to an 'acceptable standard' during 3 shows and (fortunately) this 30.7.76 show is one of them. Indeed as 2001, blends into a just passable See See Rider and we hear Elvis its clear he is 'medicated', but NOT overly so and knows where he is and sings a full show. Immediately during I Got A Woman/Amen during the Amen reprise J.D. Sumners' voice comes across with a very deep bass and pleasing to hear.

Elvis is clearly in 'good humour' as he describes J.D as 'the worlds lowest Human!'

Elvis notes that it's a very high stage and proceeds with a fair version of Love Me. Before the next song Elvis asks the audience all crowding upon one another below the stage to calm down and not get hurt. During If You Love Me, Elvis makes some amusing word changes but cannot disguise his voice sounding tired + strained. You Gave Me A Mountain is performed 'above average' and James Burton's guitar clear in the mix sounds just like the 1977 'In Concert' version. Help Me is next, and is certainly 'sincere' if not his best version.

Assesing his own poor state Elvis says he'll do a medley of his records next, but whether he can or not is a different matter, making it clear the roasting he got from the Colonel two days ago in Connecticut about poor performances was still fresh in his mind. All Shook Up, Teddy Bear/Don't be Cruel are all the usual 'lacklustre' 1976 performances. And I Love You So is certainly NOT as good as the superb Tuscaloosa 1976 version (as Elvis is un-focused at the start), but Kathy Westmoreland can be clearly heard at the ending despite never getting introduced in this show. America is a decent version and amusing line change to 'fruits & plains'! This features a decent reprise ending. Jailhouse Rock next is a typical poor short 1976 forgettable 'soft' version and yet Funny How Time Slips Away is a concert 'highlight' as Elvis sings well including nice falsetto + timing.

The introductions are mostly very 'boring' but Early Morning Rain is almost a complete version, which it seems John Wilkinson himself ends abruptly, one verse short of the end. This is another concert highlight to my ears because of the mood it conveys so well. The Stamps get amusing intros, then the usual 1976 What'd I Say and Johnny B Goode by James Burton and minimal Elvis contribution. Ronnie Tutt's long boring Solo fills in more time before Jerry Scheff plays his version of The Battle of New Orleans, then Tony Brown's piano solo and David Briggs' solo and Love Letters with Elvis giving us a one liner 'Albatross' before his lacklustre performance. After the Joe Guercio orchestra and a bit of School Days its two performances of his latest record Hurt With the 2nd version getting a nice 'up higher' ending from Elvis - another concert 'highlight'. Hound Dog is ultimately 'throwaway' before a decent version of The Hawaiian Wedding Song (apart from one odd word change) just before closing with Can't Help Falling in Love - in a few words Elvis shows how absolutely tired he sounds - still certainly a listenable show with a few highlights. Elvis didn't have the energy to do Polk Salad Annie tonight or bend over low reaching the fans below the high stage.

The 'bonus' track is THE performance highlight from his Hampton Roads show two days later (by which time he had the Flu!) thankfully it's a reasonably performed 'request' for the 'Return To Sender' fan Club and I'm sure they must have been delighted. I recommend this CD because the performance is just passable from a dreadful tour and the sound balance is impressive in its clarity - far easier on the ears than listening to FTD America. I'll certainly be playing this CD a few times before I stack it away on the shelf. 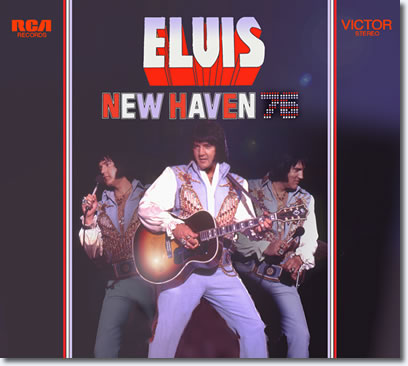