While it is well known that Elvis Presley and Sammy Davis Jr. were good friends, first meeting in the 1950s, maintaining a friendship through the years, now, we have a fantastic photo via a news paper clipping from Jet magazine, February 27, 1958 showing Sammy in full swing imitating Elvis, and what's more, the clipping tells us that Elvis was sitting in the front row, roaring with laughter. Imitations were a big part of Sammy's shows and Elvis was not left out in this regard, with Sammy singing Hound Dog in concert. 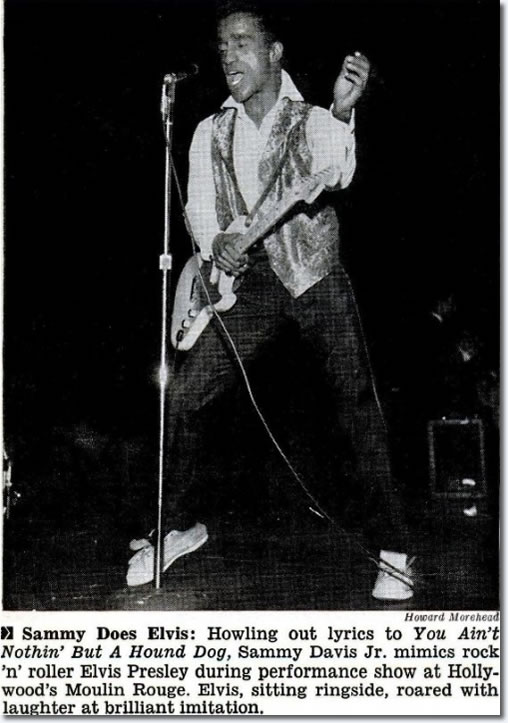 Of Elvis, Sammy said, 'Early on somebody told me that Elvis was black. And I said 'No, he's white but he's down-home'. And that is what it's all about. Not being black or white it's being 'down-home' and which part of down-home you come from' ... 'I have a respect for Elvis and my friendship. It ain't my business what he did in private. The only thing I want to know is, 'Was he my friend?', 'Did I enjoy him as a performer?', 'Did he give the world of entertainment something?' - and the answer is YES on all accounts.

The other jazz just don't matter' ... 'On a scale of one to ten, I would rate Elvis eleven'.

Sammy Davis Jr. was a multi talented, versatile and dynamic singer, dancer and actor who overcame extraordinary obstacles to become a leading American entertainer. Elvis gave Sammy a gift of a black sapphire ring and told him, 'This is the biggest black star I've seen, so I'm giving it to the biggest black star I know'. Sammy was a regular at many of Elvis Presley's concerts in Las Vegas. 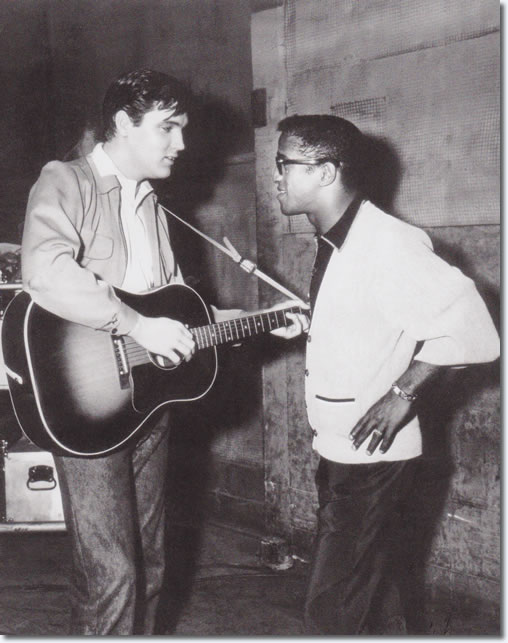 Below From Interview with Jerry Schilling by Ken Sharp:

Share your memories of watching Chuck Berry play a 3 a.m. show in Vegas with Elvis.

Jerry Schilling: Elvis and Priscilla and myself and my wife, Sandy, went to see Sammy Davis Jr. This was back in the '70s. We went to see Sammy, and then we went backstage and hung out with Sammy and his wife, Altovise. Sammy and Elvis were kind of magic together. Sammy had that great personality, and he kept Elvis laughing. It was after the late show, and Elvis said, 'Would you guys like to come over to our hotel up to the suite?' We all go in the car and go back to The Hilton, and as we're walking through the lobby going to the elevators, we heard a very a familiar Chuck Berry intro. And Sammy and Elvis just looked at each other and with a smile, we all just turned around without anything being said, and we headed for the lounge.

There was one table of people, maybe two. The whole lounge was about empty. We went down to a booth in front, and Elvis was a fun guy. He would holler out a tune. Chuck saw that it was Elvis and said, 'Hey Elvis, remember when we were battling for #1, and you had this song, and I had the other song?' The real payoff was when Elvis said, 'Do 'Promised Land!' And he's sitting with Sammy Davis Jr., and they're singing the lines along with Chuck about a poor boy wanting to go clean through Mississippi. 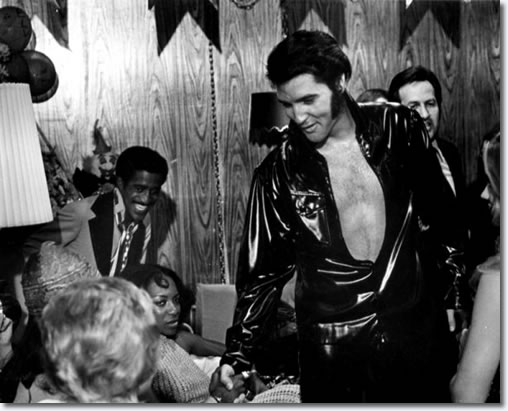 Sammy was one of the few celebrity friends that Elvis Presley had. What did that mean to Sammy and do you recall any anecdotes about their friendship?

In Las Vegas Sammy was down one hotel and Elvis was at another. I went to see both of them. I was at Elvis' and Sammy came over. You know Sammy always did an impersonation of him.

Sammy did Elvis and then Elvis did Sammy. We just stayed back stage for about an hour or two and it was wonderful just seeing them together. And it was more than one time.

I think their friendship meant a lot to both of them and also whilst we were living in Beverly Hills, we lived across the street from one of the gentlemen that was his security guard. I think it meant a bond to them, as men. You know men have bonds like ladies sometimes have girlfriends. I think it was a very personal bond between both of them that they could both share because they both came from very humble beginnings. 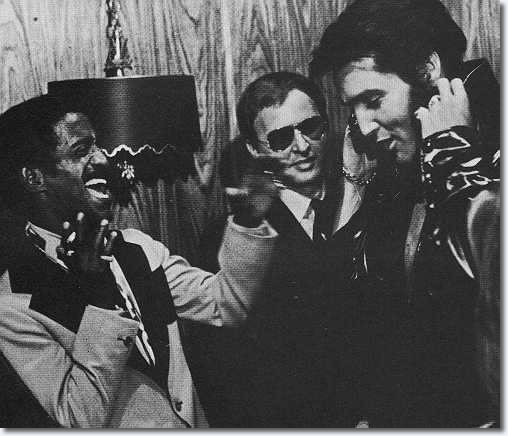