Lionel Rose was nearing the end of a hard training session when he got the message that Elvis Presley wanted to meet him. It was December 1968 and the 20-year-old Aboriginal boxer had come to Los Angeles to defend his world bantamweight title against Mexican challenger Chucho Castillo. But the bout was still two days away, and an invitation from the King was not something to be passed up. Elvis was, after all, a big favourite of Lionel's mum. Rose 'pulled off the gloves, jumped under the shower and drove straight to the MGM lot'.

Elvis was shooting the movie The Trouble with Girls. A runner on the set, a fight fan, had suggested the get-together, judging that the two men would get along well. He was right. They spent two hours together, talking about music and the manly arts. Rose had grown up in poverty near Drouin in Gippsland, learning to box from his father, a fighter in tent shows. While still in his teens, the shy boy from the bush defeated Japan's seemingly invincible Fighting Harada to become the champion of the world and a hero to Aboriginal Australia. 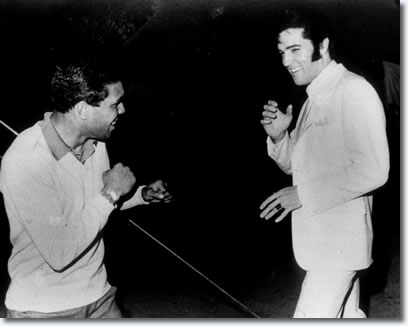 Lionel Rose and Elvis Presley meet on the set of The Trouble With Girls 1969.

Elvis, a ready scrapper since his early days on the road, had picked up a strong interest in karate during his stint in the army. A certified black belt, he did his own fight sequences in his movies, including Kid Galahad.

As well as conversation, there was a little light sparring - strictly for the camera - and an autographed US dollar bill as a gift for Lionel's mum back home. Would Elvis ever come to Australia? Rose wondered. Too far away, said the King. They parted as friends, the young boxer 'pleased as punch' by the encounter.

Rose returned to his training and beat Castillo on points, eventually notching up 53 professional wins before retiring in 1976. Between bouts, he displayed a softer side as a crooner of country ballads. 'I Thank You' and 'Pick Me Up on Your Way Down' both topped the charts.

Lionel Rose's career embodied the stuff legends are made of. In a boxing career begun in a makeshift ring in a poverty stricken aboriginal settlement, Rose developed a crushing punch that helped him become the first Australian aborigine to win a world championship title, and the second Australian to take home a world title in boxing. His win catapulted him to fame in Australia. His lifetime career of 53 fights with only 11 losses made him a legend in the world of boxing. Lionel Rose was born June 21, 1948, and raised in Jackson's Track, a poor aboriginal settlement 50 miles south of Melbourne. Drouin, Victoria, Australia.

How Did Elvis Get Turned into a Racist? - By Peter Guralnick