One of the latest classic albums to get the FTD treatment is Elvis Sings The Wonderful World Of Christmas, released this month. With the help of outtakes not being overdubbed in any way, it reveals a more intimate and sensitive side of the Christmas recordings that took place in Nashville during two nights in May 1971. (A remake of one of the songs, I'll Be Home On Christmas Day, was done one month later but not used on the original album.) Maybe it was the great big decorated Christmas tree that was placed in the middle of RCA's Studio B that got Elvis in the right mood for the session. Maybe Lamar Fike dressed up as Santa Claus did the trick. Whatever the reason Elvis seems to be having a good time from the start. 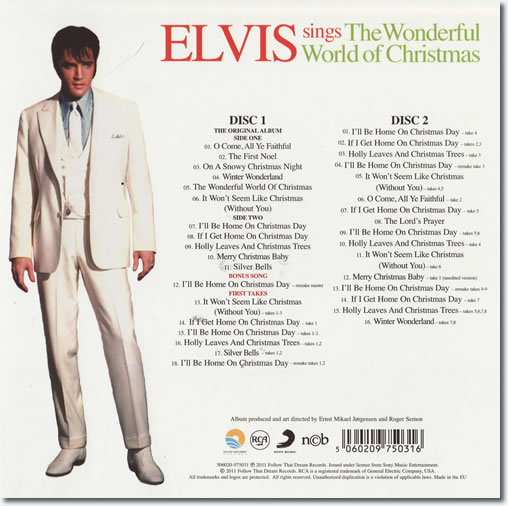 While producer Felton Jarvis and the musicians discuss the beginning of It Won't Seem Like Christmas (Without You) featuring a celeste, Elvis throws in a line of Merry Christmas Baby. David Briggs follows suit, hammering away on the celeste. 'I gotta hold you guys down, man', Elvis laughs.

Admittedly, he sounds a bit annoyed when the second take breaks down, complaining that the lyrics aren't written out, but then works hard through a couple of more takes before settling on take 7 as the master. The previously unreleased take number 5 is a highlight, with Elvis pushing the boundaries of the song, the result a more loose and less polished version than the master. Unintentionally or not, he even changes the line 'Far too many miles are between' to 'Far too many years come between' at the end of the song.

When released on the original album back in 1971, Felton Jarvis had just about used every trick in the book when it came to making overdubs on If I Get Home On Christmas Day, adding strings, horns and a lot of backing vocals, creating what I like to call a 'bombastic Elvis sound'. Listening to the alternate takes, especially the early ones, you can almost be fooled into thinking it's another song, it sounds so much more intimate. No less than three complete takes are previously unreleased, all of them having Elvis singing 'Somehow I know I'll get my chance this time' instead of 'I know I'll get my chance with you this time' as used on the master.

Another intimate and sensitive song is the pretty Holly Leaves And Christmas Trees, written by Red West and featuring a simple but effective arrangement for acoustic guitars and organ. The phrasing is a bit different at places on the previously unreleased takes 2 and 3. It must have been a treat for Red watching Elvis working with his song in the studio, recording no less than five complete takes of it. 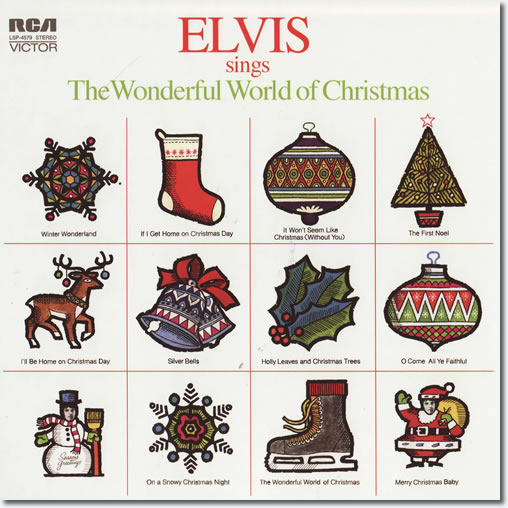 One of the highlights of the album is the blues classic Merry Christmas Baby and here we get the complete studio performance as released on Memories Of Christmas in 1982, preceded by about 30 seconds worth of rehearsal, previously unreleased. Listening to Elvis saying 'Yeah, just run it a couple of times and I'll come in there, you know, somewhere. Let's set the rhythm first', it's easy to imagine him in the middle of the studio with a mike in his hand, his musicians in a semi-circle around him.

For some unknown reason this unedited version switches to the original album master mix (with a guitar overdub) approximately four and a half minutes into the song, and then back again to the undubbed mix about one minute and ten seconds later. This was also the case on the version found on 'Memories Of Christmas', but not on the slightly shorter edit (7:19) included on 'Reconsider Baby' released in 1985.

It would be interesting if Ernst Jorgensen could shed some light on this.

Another song that offers some interesting studio dialog and rehearsal is 'Silver Bells', the last song to be recorded on the first night. Before tackling the first take Elvis says, 'Charlie, why don't you guys do harmony with me and help me sing?' After a false start, Elvis tells engineer Al Pachucki that he doesn't want the harmony to be on the record, just hear it to get it right. In his book 'A Life In Music' Ernst Jorgensen describes this episode as 'an uncomfortable impasse' but listening closely, I don't hear anything suggesting this, Elvis sounds polite and Al doesn't seem to take offense. 'OK, that's very good', he answers back, asking Charlie to turn an amplifier down. The second night of recordings kicked off in great style with Michael Jarrett's I'll Be Home On Christmas Day. Elvis seems relaxed and jokes around between takes. When Felton Jarvis suggests they need a sandpaper effect, one of the musicians jokingly remarks 'He wants to do his fingernails!' to which Elvis responds laughingly, 'Do that shit on your own time, Felton. You can get a manicure tomorrow, hell!'

As for the song itself, takes 3 (with extra verse) and 4 have been released before, on I Sing All Kinds (2007) and Platinum - A Life In Music (1997) respectively, but the studio banter between them has not. 'Before we were doing eight verses, we'll cut it down to six', Elvis says, and you can almost hear him cross out a couple of them on his lyrics sheet as he mutters, 'one, two, three ... let's see...'

Take 6 is previously unreleased, recorded after Elvis did his informal rendition of The Lord's Prayer It's a beautiful version, thankfully lacking the unnecessary overdubs found on the master. Elvis is in fine voice, conveying the message of the song perfectly. Another highlight. The seasonal standard Winter Wonderland is on the other side of the spectrum. After a spiritless take 7 (the first six takes were on a reel that was erased) that finishes abruptly after the guitar solo when Elvis messes up the lyrics, laughingly throwing in some explicit language, he exclaims, 'I'm getting tired of this damn song. Tired of it!' Do his credit, he then tries hard to get it right, rehearsing together with pianist David Briggs on how to come in after the solo.

Fortunately, O Come, All Ye Faithful proves a return to the better and a much more inspirational Christmas performance. The previously unreleased take 2 has Elvis making a mistake as he begins to sing the second verse too early but is otherwise beautifully performed. It also runs longer than the master (take 1), featuring the first verse one more time at the end (this verse was spliced with take 1 on 'Memories Of Christmas'). The voices singing with Elvis are unidentified, but according to the booklet it's most likely some members of Elvis' band and entourage, like Charlie Hodge and Red West. Incidentally, this is a song that I actually think benefited from the overdubs made a little more than a month later, giving it a more 'churchly' sound. Of the remaining three Christmas songs recorded on the second night, no outtakes exist. On A Snowy Christmas Night was recorded on the same reel that included the first six takes of 'Winter Wonderland' and was erased. And another reel, used while recording The First Noel and The Wonderful World Of Christmas, is missing.

Compensation comes in the form of all the nine alternate takes (three of them complete) from the remake of I'll Be Home On Christmas Day, recorded in June. For some reason Elvis wanted to give the song a more solid and heavy beat, the result being a bluesier version. 'Rough, very rough', he exclaims after the take 2. The third take, previously unreleased, has Elvis slightly messing up the extra verse featuring Michael Jarrett's children. That doesn't stop him from delivering an enjoyable, funky version, urging the band along and telling them to add another verse. 'That's a lot better like that, Elvis', Felton Jarvis can be heard saying right after the ending.

Obviously he's in a good mood here as well, kidding with the producer and the musicians. 'I didn't like that, that was too good', he jokes after an abandoned intro. 'Nothing went wrong so I couldn't criticize it'. For some reason, he breaks up laughing during take 6, and after take 7 says, 'Come to think of it, I liked the original version better', evoking laughter. It's hard to tell if he's joking this time, but the master was shelved, and not released until eleven years later on 'Memories Of Christmas'. To finally have all the outtakes from this great remake on one release is worth the price of the album alone.

I also have to mention the booklet that displays some interesting memorabilia, such as an alternate album cover, a document ordering that Miracle Of The Rosary is to be deleted from the tracklist and a sketch stating that the title (or maybe subtitle) should be Christmas Songs For You From Elvis. Unfortunately the In And Outtakes section contains some minor errors as does the tracklist ('Silver Bells' doesn't include take 2, just take 1). A bit sloppy perhaps, but nothing to get upset about. The main thing is that FTD presents us with another winner in their classic album series - one that shows the 1971 Christmas recordings in a different light.