Unlike Elvis' first two religious albums, His Hand In Mine and How Great Thou Art, his third and last one, He Touched Me, was a mix of traditional gospel and more contemporary Christian music. Recorded in Nashville in March, May and June 1971, the recently released FTD treatment of the album opens the door to RCA's Studio B to let us experience these recording sessions first hand. It makes for a fascinating visit.

Listening to Elvis and his musicians at work, one gets the feeling that it was the modern Christian material that demanded their attention the most. (With the exception of the rocking 'I've Got Confidence' that Elvis nailed in two takes.) Maybe not that big a surprise, as Elvis was probably already familiar with the traditional gospel songs selected for the album, such as 'Bosom Of Abraham' and 'I, John'.

One example of a song that stretched the bounds of the strictly sacred is 'Seeing Is Believing', written by Red West. Elvis runs through 14 takes with his players and singers to record a master to his satisfaction, and ten of the outtakes (four of them complete) are included. This really gets you an idea of how Elvis worked with a song, from discussing the intro, ('No man, the drummer was right ... yeah, I like that base thing') to working out how the female backup singers should sing with him. ('I think if you do it straight ... seeing, seeing, seeing is believing ... yeah right!) and deciding on a new ending ('We just fade this thing out, let's not do that stop ending'). Of the complete outtakes (two of them previously released), my favorite remains take 7, more funky than the master, and released by FTD on I Sing All Kinds in 2007. 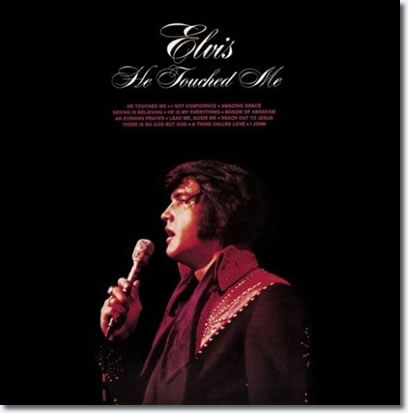 'Reach Out To Jesus' is another treat. Here we get to hear no less than seven abandoned starts of the song. Not that Elvis minds, he is in a laughing mood, throwing in an 'Oh happy day' now and then after a failed introduction, evoking laughter from him as well as the musicians. When they finally get past the piano introduction, what follows is a beautiful gospel performance (take 9, the one before the master).

A third chance to study Elvis craft is offered through the seven takes of Jerry Reed's 'A Thing Called Love' as well as the rehearsal, where producer Felton Jarvis decides to let bass singer Armond Morales of the Imperials have his own mike. The reason for this is that he's singing in unison with Elvis throughout the song. Elvis is in good spirits here as well, throwing in a verse of 'Listen To The Bells' before the forth take. It's also interesting listening to Felton Jarvis blaming Joe Moscheo of the Imperials ('A bad chord on the piano') after a take falls to pieces. 'I didn't make that mistake', Joe answers back, and as far as I can tell he's right.

Many of the takes included on the two CD's have been released before, but not with as much studio banter. The second take of 'He Touched Me' illustrates this, as we for the first time get to hear the Imperials and Elvis working out the introduction together. Elvis exclaiming 'god damn' after the ending because his voice gave out was a new listening experience as well. Another example is the banter before the second take of 'Amazing Grace' (following the first abandoned one) which has Elvis saying 'I hit the wrong words, I was singing 'Love Me Tender', and one of the musicians answering, 'You was singing the hell out of it, whatever it was'. I think he's right. I actually prefer the bluesy take 2 over the more conservative master. 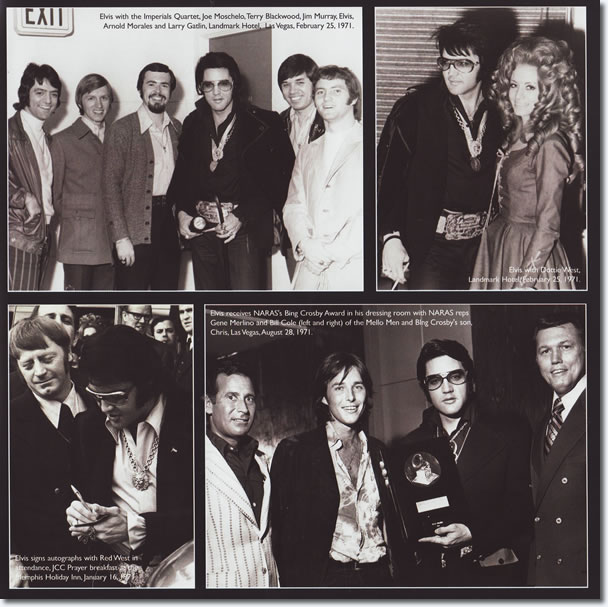 He Touched Me FTD Classic Album 2 CD: From the booklet.

A third song that offers some interesting studio banter not heard before is 'Bosom Of Abraham'. 'You're the rhythm section', one of the Imperials says after take two falters and comes to a sudden stop. 'You're supposed to get it right. We're the singers'. In one instance, the opposite is true as well. When originally released on FTD's Easter Special (2001), the first take of 'He Is My Everything' had Elvis singing a bit of 'Mean Woman Blues' before trying out the beginning of the song. Here that part is gone.

FTD's He Touched Me follows the formula for the classic album series with the outtakes evenly spread out among each other, that is, not all the outtakes from one song placed after one another. 'Makes for more listening pleasure', I think Ernst Jorgensen's explanation was when asked about it sometime. In this case I'm glad for that line of reasoning, as it would have been a bit demanding to listen to five complete, very similar outtakes of 'An Evening Prayer' in a row, no matter how sincere Elvis sounds. The informal performance 'The Lord's Prayer' is also included, as is the incomplete 'Johnny B. Goode' jam, after which Elvis fools around with a couple of lines from 'The First Noel'. It would have been nice to get this jam in its continuity, that is, together with the religious song that then followed. Maybe the jam was just found as a snipet on a tape in the way it's presented and that just wasn't possible. Neither the CD's, nor the cover or booklet offers any leads. 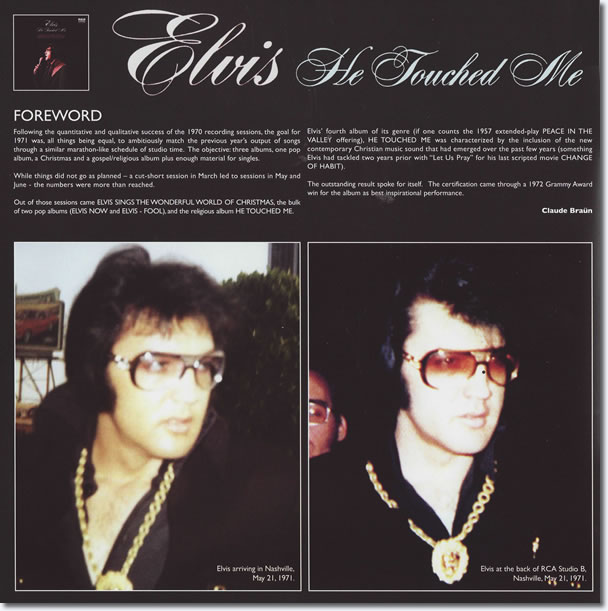 He Touched Me FTD Classic Album 2 CD : From the booklet.

Speaking of the cover and booklet, here I have to lodge my only complaint. The tracklist mentions that 'He Touched Me' (take 3) and 'He Is My Everything' (take 4) are incomplete, but fails to do so with 'I, John' (take 1) as well as 'A Thing Called Love' (take 7). I also have a hard time understanding why stage photos of Elvis not wearing the same jumpsuit as on the cover of He Touched Me are featured so prominently.

These are minor details, however. If you're interested in Elvis' religious songs and how he recorded the album that won him his second Grammy, He Touched Me in the classic album series is for you.

One final note. In his book Careless Love, Peter Guralnick writes that Elvis' 'attention continued to wander' during the sessions when the songs for He Touched Me was recorded. Maybe that was the case, but it's not something I found evidence of while listening to the outtakes provided by FTD's treatment of He Touched Me.

Thanks to Thomas Melin / Elvis Today for this excellent review. Watch for a joint review by Thomas and Troy Y. (Tygrrius) of 48 Hours To Memphis coming soon to a good website new you

Buy His Hand In Mine: FTD 2 CD Classic Album

View all in the FTD Classic Album Section along with many other of Elvis' albums.