'On Stage' on disc one and 'Elvis In Person' on the second are presented in their original running order and augmented by a total of ten interesting and very good bonus songs.

'On Stage' features the original 12 tracks - the one true unique live album from Elvis in the 1970s - three bonus tracks and the full 6 minute plus rehearsal of The Wonder Of You to conclude the disc. 'On Stage' was one of my absolute favorite albums when starting off as a fan, and still today it hold up as second only to Aloha From Hawaii due to the unique track listing chosen and of coarse Elvis being at his absolute best. Featuring no Elvis Presley hits the opener, See See Rider will dispel any doubts quickly that any casual buy may have. The versions of Yesterday and Proud Mary are fine, but it's the Southern-fried cuts such as Tony Joe White's Polk Salad Annie and especially South's Walk a Mile in My Shoes on which Elvis sounds strongest.

What was true in 1970 is still true: Presley's vocals were in beautiful shape at the Las Vegas shows at which these songs were captured. Some of the banter, too, is a priceless portrait of a man they called the King.

The bonus tracks are Don't Cry Daddy, Kentucky Rain and the rocking Long Tall Sally and as mentioned, the rehearsal of The Wonder of You completes the album - listen for Presley's scatological lyric shift early in the song. This rehearsal is released here for the first time (one 'take' was released on 'Platinum') and it is revealing to hear Elvis 'producing' the song as he formed it into what would be his arrangement for the stage version that would become the huge international single. As good as this is though I do prefer to listen to it separately and play just the original album tracks. Less is more as they say and in this case I don't want any distraction from the classic album, it is just so darn good! An indeed due to the 'vandalism' to the format with the previous CD it has been awhile since I have had the pleasure of listening to this album. It is nice, indeed a great improvement over the previous CD release to have the original album without bonus tracks interrupting the original track order, the bonus tracks are at the end following a suitable silence.

'In Person' takes us back a year to 1969 with the songs Johnny B. Goode, Mystery Train/Tiger Man, Words, In The Ghetto and, most of all, an absolutely stunning version of his then current single Suspicious Minds being the standouts, but there's really not a bad song on this collection.

Elvis sounds loose, comfortable and artistically commanding on stage, in both 1969 and 1970, a surprise given his eight-year hiatus from live performance. The essential flame that sparked in 1954 was clearly still burning within sixteen years later. A hint of his humble uncertainty is shown as he introduces Kentucky Rain with 'I have out a new record, just came out in the past week or so, I hope you like it', but his fans never had a doubt. As with his Memphis sessions of 1969, the liberty to engage his musical muse spurred Elvis to great artistic heights. Freed from the movie commitments and subsequent soundtracks, standing in front of an audience he'd not seen face-to-face in nearly a decade, Elvis dug deep into the music he loved.

Now with this disc I do like to listen to the bonus tracks as part of the concert, they fit and compliment the album nicely, whereas the bonus tracks for 'On Stage' don't fit the unique sound that the original album offers. And indeed this tracklisting is much preferred to the FTD In Person release with the bonus 'rare performances' of This Is The Story, Inherit The Wind and Rubberneckin' (among others) that simply do not fit the 'feel' of the original album tracks. Although the set does appeal strongly with it's second disc containing the full August 22, 1969 Dinner Show. Read our

Reflecting on the original LP release and now this CD release one could say this was Elvis' last 'Rock 'n' Roll' album. It really does rock with the intensity of the 50s, like no other concert or studio album to follow.

Besides hearing Elvis in all his glory mention must be made of his superb musicians.

James Burton (guitar), John Wilkinson (guitar), Jerry Scheff (bass), Larry Muhuberac (piano 1969), Glen D. Hardin (piano 1970), Ronnie Tutt (drums 1969) and Bob Lanning (drums 1970) are peerless as well as soulful and sophisticaded players that covers the whole spectrum of music that Elvis wanted to present. White gospel group The Imperials and black soul quartet The Sweet Inspirations are also a joy to hear. If You're the least interested in Elvis Presley You're not excused for missing out on this one. The albums were commercially successful receiving gold and platinum sales awards respectively. Truly a package fit for a king!.

While previous versions of this material have lacked in sound quality or had unnecessary reverb added, the Legacy Edition features superb mastering by audio guru Vic Anesini. This material has arguably never sounded better. The packaging is also top-notch, with liner notes by Elvis: Vegas ‘69 author Ken Sharp.

On Stage: Legacy Edition is a fine addition to the Elvis Presley catalogue. It combines some of his best live work into one package and has the sense to keep the flow of the original albums and concerts intact.

Elvis On Stage is a Hit with Critics

CD Review : From Elvis in Memphis by David Troedson

CD Review : From Elvis In Memphis by Tygrrius

The first disc in the On Stage: Legacy Edition package is a newly-remastered version of Elvis' first live album.

The disc's final addition is a unique glimpse of Elvis working on his repertoire, as he runs through 'The Wonder Of You' at an afternoon rehearsal, only hours before the original album recordings were done later that night.

This 2-CD set is a potent reminder that Elvis was enjoying one of many career peaks during these engagements in Las Vegas. During the August 1969 shows that yielded In Person, the artist prowled the stage like a panther and shocked audiences with his full-throttle intensity. Conceived similarly to his '68 Comeback Special, these tracks capture Elvis doing what he did best, but now with a full band and an hour-long setlist. 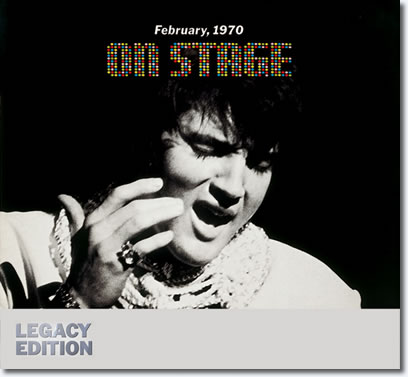 I am so excited about the new CD 'On Stage'.

I just got it today and was no less than thrilled as I listened to it for the first time. I was just expecting some 'unreleased' songs thrown into the mix, but was I surprised! The entire CD has been remixed, or should I say 'unremixed', the songs sound a lot different without all the tampering that RCA did for the original release in 1970. Even the bantering in between songs has been 'changed' (for a lack of a better word). I am assuming that it has been 'restored' to the original tape and not edited and Elvis' 'comments' just inserted in between songs as were done in the original release. (Elvis even introduces Fats Domino in this new release as well as the classic 'kissing segment' slightly changed), all the mixes in the songs are quite different than the original release, and I was very pleased with what I heard. This is probably the original mixes done live and have now been graciously given to us to hear unaltered!, and this is just the songs that we have heard before, (by the way, the un-fixed version of 'The Wonder Of You' is clearly heard on this gem of a release).

It is very refreshing to hear all the new material on this now complete retrospect of Elvis' first appearances in Las Vegas, the unreleased songs, held back from release in 1970 for obvious reasons then, now bring to light the real raw power that Elvis brought to the stage those first few years in Las Vegas.

The early live versions of 'Suspicious Minds' and 'Don't Cry Daddy' are classic 'Elvis live'! and the supercharged energy on 'Long Tall Sally' clearly portray the excitement and energy of what Elvis was like on stage . This is the kind of releases that all the fans are screaming for.

I find it very disturbing that there are still some 'gimmick' releases still coming from RCA. The other new CD's that came out today are not, I repeat, not in my collection in this new form, nor will the ever be. I find it insulting when these type of 'old hash' compilations' are released when there are still so many 'gems' still left to be released like the 'On Stage' CD. This CD was done so well and is truly 'collectors gold'.

Most of the time, since Ernst took 'over', the releases have for the most part made good sense, and than they throw us a curve with these re-re-re-release in new 'packaging'. bmg should keep the good stuff coming like 'On Stage', we sure could use a great new 'Elvis In Concert-1977' compilation CD set with all the 'fans comments' removed and all the unreleased songs put back into a release that will satisfy all die hard fans.

Well. enough bashing, the Elvis releases and the state of his catalogue for the new millennium looks very bright. Keep it coming'. I would recommend to anyone who does not have the new 'On Stage' CD, run, don't walk to grab one, and you will be very pleased. You will sit back and think to yourself with a sigh of exhilaration, ahhhh, this is what it's all about, this is what makes it all worth while!!

Elvis On Stage is a Hit with Critics