Review | The On Stage Season: The Opening And Closing Shows, February 1970

Sandwiched between Elvis' iconic return to Las Vegas in 1969, and the triumph of the 'That's The Way It Is' documentary (1970) - 'On Stage Season' FTD 2-CD captures Elvis in spectacular form during his live performances - and includes two complete soundboard shows in the best EVER quality from his 1970 Jan/Feb Las Vegas engagement.

Follow That Dream offer a double whammy of historic 1970 shows by including both the opening and closing shows from the Jan/Feb Vegas engagement. There's a familiarity with the songs due to the popularity of the platinum-selling ON STAGE album. 'On Stage Season' FTD 2-CD continues in the same rich vein...

Elvis Performed two shows a night over four weeks. These fascinating shows are almost a continuation of the fabulous August 1969 shows represented by FTD (Hot August Night - Elvis At The International etc). More so, the release is a fine companion for the FTDs excellent On Stage Classic Album release, albeit in soundboard quality - and was Elvis anymore POTENT heading into his storied jumpsuit years than 1970?

The upshot is although bootlegged to the hilt, these fantastic shows garner new plaudits. Sony sound guru Vic Anesini has worked wonders with the master tapes to give the listener a finer audio experience. That said, there's mic overload on the opening shows early selections: Opening with hints of feedback, and Bob Lanning's drum riff - 'All Shook Up' proves Elvis is in fine voice. 'That's All Right' quickly follows.

Dean Martin was an influence on Presley and was in the audience when Elvis sang the opening lyric to the Rat Pack legends 'Everybody Loves Somebody', teasing the adoring Vegas crowd. (if only he'd continued...)

More standouts: The heartfelt ballad - 'Don't Cry Daddy' is essential hearing. It's a stunning live version. So beautifully performed by all. Elvis sings: 'Don't cry daddy - daddy please don't cry, Oh no!' The 'oh no' adding poignancy. Little Richard's rock 'n'roll nugget, 'Long Tall Sally' gets the full-on treatment with a wonderful solo from James Burton. Note: there's been some talk about fans preferring the second disc due to better sound. Well, let me tell you: disc one is VERY easy to listen to. And an enjoyable listen, even in lieu of the soundboard sound.

The Everly Brothers 'Let It Be Me' is superb but the sound limitations render a weak Burton solo (rectified in delicious style on the closing show version).

Repeated plays consign the sound issues to a minor quibble – and what strikes the listener is the sheer wealth of quality songs performed... Ray Charles, 'I Can't Stop Loving You', is just one of the numerous cases in point. Elvis shouts inspiration: 'take it boy! Take it' during a riotous version. Indeed, like the aforementioned gem, 'Don't Cry Daddy' - 'True Love Travels On A Gravel Road' is a highlight and great to have here. Elvis performs this rarely performed, gospel-inflected R&B number with gusto, even after a false start. (A year later in 1969, legendary soul magus, Percy Sledge had a hit with the song).

Likewise - 'Kentucky Rain' is also very pleasing in a live setting. Furthermore, Elvis introduces James Burton as his favorite guitarist, 'Buffalo Bill Burton' during the intros, a wonderfully humorous moment (During the closing show James is introduced as Chuck Berry).

From the get-go - 'All Shook Up', 'I Got A Woman' - and 'Long Tall Sally' all vigorously hit their mark - followed by a 'Everybody Loves Somebody', one-liner. A solid 'Hound Dog' follows with a-rockin' solo from James Burton. Note: maybe the only minus over the two discs is James Burton's guitar which is low-sounding on selected tracks, but on 'Hound Dog' it rocks! More standouts: A flawless 'Kentucky Rain' - you can even hear the bell chimes... Also of interest is a mid-set performed version of 'See See Rider' which gallops along at great pace. A song that become a regular opener throughout the 1970s. Elvis performs a lively version here. 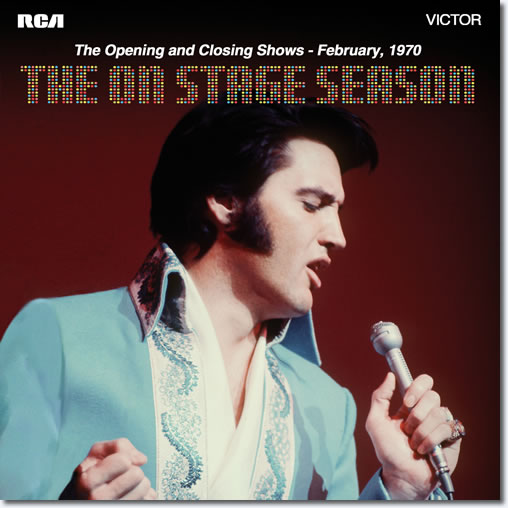 There's two 'Lord have mercies' during a stunning - slow burn, steamy swamp funk version of 'Polk Salad Annie' - with the Sweet Inspiration's adding intro handclaps and hot soul spice for the conclusion: Elvis asks Jerry Scheff to continue playing bass while the Sweet Inspirations add: 'Hey, hey, I feel alright' for a full 1 minute plus, while Elvis enjoys time-out, glad-handing and crowd smooching. It ranks as one of the best versions of the Tony Joe White classic (In the booklet: Menu from the Internationale Hotel - 'Elvis Special' - 'Polk Salad' with corn muffins & honey $1.95).

'One Night With You' rocks before a beautiful 'It's Now Or Never' - Ernst Jorgensen once described the August 12 show from 'That's The Way It Is', as one of Elvis Presley's best shows, well Closing Show February 23 is also a contender...

The closing night shows were more relaxed affairs than the early shows. One listen to the intros is proof - also he received standing ovations for his performances. And in attendance were scores of famous actors and performers who had come to pay homage to the King.

Opening the album there are two black CDs with ELVIS written in white. Additionally, the ON STAGE artwork is mimicked for 'On Stage Season' - a cool touch! Behind the discs are photos of Elvis wearing his white tasseled jumpsuit. There are documents and press reviews. One review reads: 'Charisma of Presley Still Rocks Vegas'. Furthermore, Ann Moses Marino adds an insightful essay mentioning the euphoria around the concerts, and says it was: 'A once-in-a-lifetime experience'. 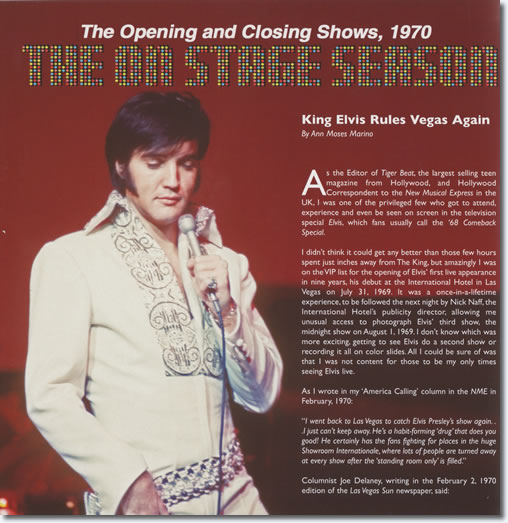 'I went back to Las Vegas to catch Elvis Presley's show again... I just can't keep away. He's a habit-forming 'drug' that does you good! He certainly has the fans fighting for places in the huge showroom Internationale, where lots of people are turned away after the 'standing room only' is filled'.

It's a fabulous booklet with gorgeous photos. One rare image in particular shows Elvis backstage just before showtime talking to the one of the Sweet Inspirations and an Imperial.

Also mentioned is Bill Porter who made the recordings at the request of Tom Diskin. Moreover, on the back cover what appears to be a delightful touch- a painting of the Showroom Internationale.

Not being privy to the boots these new FTD soundboards sound completely new and fresh to my ears. However, disc two is the BETTER sounding, but the difference is negligible. I've experienced deep joy listening to this OUTSTANDING FTD release, and have been reminded YET again by the QUALITY of Elvis' voice and performances, why I'm an Elvis Presley fan. Highly recommended.

The On Stage Season: The Opening And Closing Shows, February 1970