The Houston Astrodome was chosen by Colonel Parker to be the first venue for Elvis to perform outside Las Vegas. This was done for several reasons, but none of them was because the place was suitable for a show of the kind Elvis held. 'The Dome' was an enormous hall, built in 1965, the least of its functions being for concerts. Parker was possibly unsure of Elvis' status in the wider world - performing in Las Vegas was something quite different from performing in venues which could seat far larger audiences. The rodeo show at 'The Dome' always attracted thousands of people no matter what. After the concluding show Elvis held a press conference for about 100 journalists at Astroworld.

He declared that he got a big thrill out of the appearance in 'The Dome'.

Elvis checked out of Astroworld wearing a blue Easy Rider-inspired suede jacket and black trousers, taking with him 20 suitcases and 3 guitars - $1.2 million richer than 3 days earlier.

Q: What made you decide to come to Texas?

Elvis: Well, to tell you the truth, I started out here in Texas. I think the first shows that I worked was down here, around Houston, and all over Texas.

Q: Do you remember what locations you worked here in Texas?

Q: What do you think of Texas? 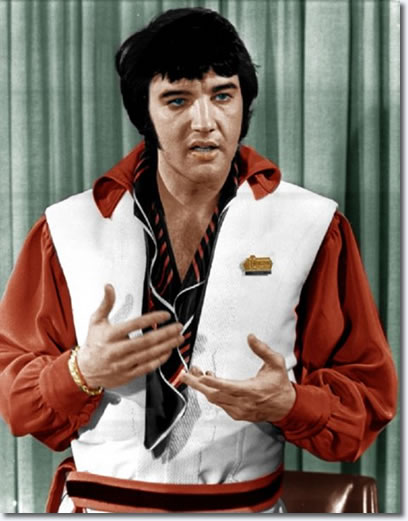 Q: Elvis, can you give us, I understand with all the big engagements, like Las Vegas, etc… the reason why you selected the Houston Live Stock Show and Rodeo this year?

Q: You ever seen the inside of the Dome before?

Elvis: Never have. It scares the (laughs)… it's a big place, man, you know.

Q: You've been known as the King of Rock'n'Roll. Do you think your style has changed now from the days when you were King or do you consider that's still your style?

Elvis: I think the overall thing has improved.

The overall sound has improved, I mean, I think it… it's according to the songs, you know.

It's just according to the songs.

Q: Is your stage presentation still the same way it was or have you improved on that?

Elvis: Well, I just do whatever I feel on stage, you know, I always did that.
Q: Are you going to keep making films?

Elvis: Hope to. (Laughter) Well, I'd like to make better films and…

Q: What do you mean by better?

Elvis: Better than the ones I made before. 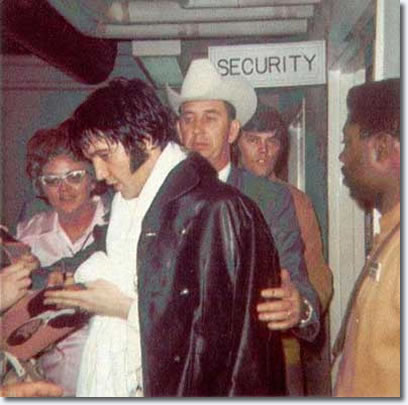 Elvis: (Coughs) Excuse me. I can't take this fresh air, man. I'm used to the garbage can at the International Hotel, man. (Laughter) If I can't smell some garbage, I don't feel at home, man, I tell you. (Coughs)

Q: Do you have any films in the making right now or any planned?

Elvis: No, there's nothing as far as I know, is there Colonel? Anything in the workings?

Colonel Parker: No I can't predict myself.

There's nothing as far as I know, no.

Q: When you look at your opportunity, what will you do to try to fill up the Astrodome?

Elvis: Well, it'll be the type of stuff that I do. It's a mixture of things, you know. It's a little rock and a little country and western stuff…

Q: Essentially the same stuff that you did at the International Hotel?

Elvis: Yeah, it the same type of thing.

A lot of different type of songs, so I just hope I can put on a good show, mainly.

Q: Whatever happened to the Jordanaires?

Q: Do you have any thoughts about the rising interest in country music?

Elvis: I think it's fantastic. You see, country music was always a part of the influence on my type of music anyway. It's a combination of country music, gospel, and rhythm and blues. It's all combined, is what it really was. As a child, I was influenced by all of that.

Q: Do you consider yourself basically a country music singer then?

Elvis: I would hate to say strictly country because of the fact that I liked all different types of music when I was a child, you know. Of course, the Grand Ole Opry was the first thing I ever heard, probably, but I liked the blues and I liked the gospel music, gospel quartets, and all that.

Q: Do you ever pull out any of those old records on the Sun label and listen to them at all?

Elvis: They sound funny boy. (Laughing) They got a lot of echo on them, man, I'll tell you. But that's what I mean, I think the overall sound has improved today, you know.

Q: Well, do you think there's more gimmicks today than there were, say fifteen years ago?

Q: Consideration… further revaluation of your career to get you back in front of live audiences again. In other words, you were available to the public only in your films for a long period of time.

Elvis: I think the most important thing is the inspiration that I got from a live audience. I was missing that.

Q: Was it rough at the International? Was it a little bit of a strain on you after not being on programs?

Elvis: It was always terrible. I enjoyed it. Like, I know I'm going to enjoy it here because it's a live audience and it makes a world of difference.

Q: Let me ask you one thing. What's your father up to these days?

Elvis: He's around here somewhere… Ask him, I don't know Daddy, what are you up to?

Q: Could he come right up here and sit down?

Q: Elvis, there's quite an evidence of sartorial splendour. Does this indicate that the…

Q: The attire is not one that we're familiar seeing.

Elvis: It was taken from a karate suit, just a regular karate type outfit. (Siren in background) Are they coming to get me? Is that it? (Laughter).

Q: I mean, does this indicate that with your type dress and everything now that you're changing a little bit of style perhaps, in deference to what you did a few years ago?

Elvis: I don't know. I think that you'd have to see the show, you know. It's difficult to tell. I don't feel any different, you know. I don't think the dress has that much to do with it, I got the idea from a karate suit cause I studied karate for a long time and I had them make up a couple of suits like it.

Q: What do you do for relaxation? You said you studied…

Elvis: Karate! If you can relax doing this (Does a few karate chops in the air) I don't know, I read a lot and go horseback riding, and stuff like that.

Q: Do you still live principally in ah…

Q: In that show you have planned for the Dome, do you plan any of the old, old songs, some of the first ones?

Q: Any special ones?

Q: What is the biggest live crowd you've ever performed for?

Elvis: If I am not mistaken, it was Vancouver in Canada, wasn't it Colonel?

Elvis: The Cotton Bowl in Dallas. It was about 25,000 I guess, something like that. I think.

Other articles contributed to Elvis Australia by Nigel Goodall ...