Gone are all the jerky body movements that once earned Elvis Presley the nickname of 'The Pelvis'. Gone are all the actions that were dubbed vulgar by his critics. Presley's stage performance is now restrained. But that did not stop 5,500 wildly excited spectators at the Bloch Arena, Pearl Harbour, Hawaii from going outrageously wild with unreserved enthusiasm last Saturday night. Never have I heard anything like it. Their enthusiasm was fever-pitch, and they were screaming non-stop from start to finish, making it impossible to identify some of the songs he sang. Whether he was talking, singing, raising his eyebrows or just breathing, it was a signal for the volume of excitement to rise higher and higher throughout this fantastic concert.

Hundreds of naval police at this U.S. Navy fortress were detailed to restrain fanatical fans from invading the stage, and they were kept busy for the entire show.

When Elvis first appeared, his reception was so great he could not start for a full five minutes as his fans shouted themselves hoarse, whistled themselves breathless, everyone was stamping in unison their unreserved acclaim for him. Presley wore a gold lame jacket, heavily sequined, and played his guitar for one number only. His programme included all his big disc hits, plus 'Such A Night', once a top Johnnie Ray seller. 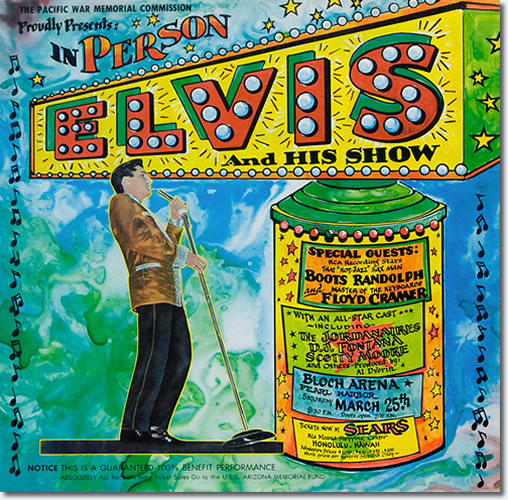 But everything sounded alike as the pandemonium reigned. It was just like a tropical storm with the thunder of noise accompanying the lightning as thousands of flash bulbs were ignited by the army of photographers.

Behind Elvis were his famous vocal group, the Jordanaires, and a fantastic instrumental group including guitarists Scotty Moore and Hank Garland, tenor sax man Boots Randolph, drummer D. J. Fontana and pianist Floyd Cramer, who recently scored a big solo hit in America with 'Last Date', which got to No.2 in the U.S. Charts, and he's just back in the U.S. Sellers with 'On The Rebound', just released in Britain.

Presley's introductions were witty, but his performance seemed to be very much tongue-in-cheek, although he appeared at all times to be enjoying it. Surprisingly, Elvis did not include his current U.S. Hit 'Surrender', but featured his first-ever record for the Sun label called 'Somethin' Blues'.

The climax came when he closed with the all-out rocker 'Hound Dog', the signal for the greatest bout of unlimited pandemonium, many of the younger girls going completely berserk! Then came the trickiest part of all - 'Operation Exit Elvis' - to get Presley out of the building before the crowd could tear him apart from sheer adoration. This was executed with all split-second timing of an army manoeuvre. Taking no encores and no final bows, he departed with the speed of a sprinter, racing from stage to a fast car, already moving as the singer got in. The amazing get-away was reminiscent of scenes from gangster films after they have robbed a bank!

The concert raised almost $60,000 (£20,000) for the Pearl Harbour War Memorial Fund. Presley and manager Colonel Tom Parker not only gave their valuable services free, but paid for all the supporting artists and purchased tickets themselves to the extent of $21,000 (£7,000).

He has ELEVEN films to make between now and 1965.

This means that no plans for overseas appearances can be made, and personals in America will be very few.

He admitted his earnings vary from five to ten thousand dollars weekly.

He is still connected with the U.S. Army, being a member of the Standby Reserves. In the event of any emergency, he could be called up for service within a few hours

‘I would like to thank the 'NEW MUSICAL EXPRESS' and its readers for the wonderful way they have treated me since the start of my career. I'm deeply grateful and send greetings to all my fans in Britain'.

50th anniversary of Elvis' U.S.S. Arizona Benefit concert, March 25, 1961 we have have some great photos of Elvis' arrival in Hawaii, of the concert, and a video of Elvis and Priscilla touring the completed facility in May 1968. More than 4,000 fans attended the concert, purchasing tickets ranging in price from $3 to $100. The concert, which featured Elvis Presley and an all-star lineup of entertainers, raised just over $54,000 toward the $500,000 goal. Many public and private donations followed the show, and the USS Arizona Memorial was dedicated on May 30, Memorial Day, 1962.

Other articles contributed to Elvis Australia by Nigel Goodall ...