Print just the image of the review via FDF Document 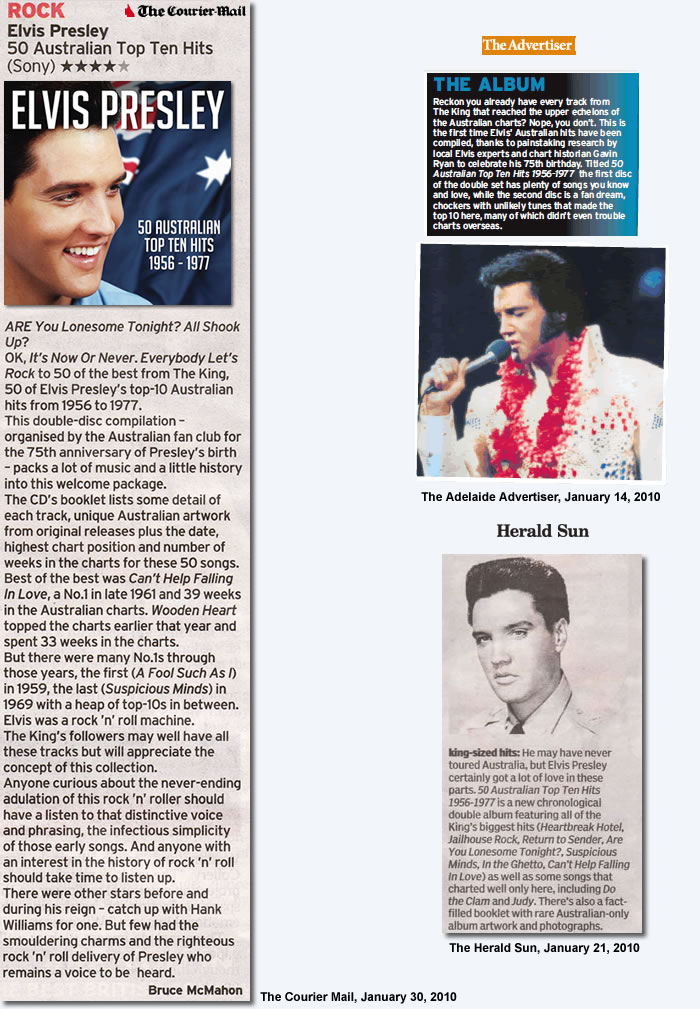 Print just the image of the review via FDF Document

The new double CD set Elvis Presley: 50 Australian Top Ten Hits 1956-1977 is the first ever compilation of Elvis Presley's Australian hits. The set provides a unique insight into Elvis Presley's popularity in Australia, a country where he managed an incredible twenty-year streak of placing hits on the singles chart. While disc one includes many of the familiar hits, disc two features not only the well known hit songs, but also many that are unique to Australia. The set contains informative liner notes written by chart historian Gavin Ryan with input from Wayne Hawthorne and David Troedson. The 18 page booklet also contains images of original RCA single releases, and CD label art inspired by his first album release in Australia, Elvis Presley LPM-1254.

Elvis a Hit with the Herald Sun Melbourne

We have included liner note text from eight of the tracks ... 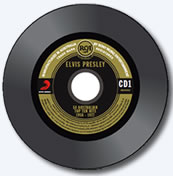 Tk10: (Now And Then There's) A Fool Such As I (#1 - 1959)
Single number twenty-five, 'A Fool Such As I', became Elvis' first No.1 national single, spending six weeks during May and June at the top of the Australian charts and taking only five weeks to get there.

This was the first of four back-to-back No.1's for Elvis in Australia. 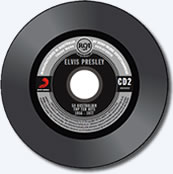 Tk30: Ain't That Lovin' You Baby (#1 - 1964)
'Ain't That Lovin' You Baby' was released as a double A-side single with the ballad 'Ask Me' and was Elvis' tenth No.1 hit in Australia, for three weeks from mid-November 1964. This song was originally recorded in June 1958, and while RCA pushed radio stations to play 'Ask Me' most ignored this and played the up-tempo 1958 recording and it was the older song that fans purchased the single for.

Tk41: Rubberneckin' (#3 - 1970)
Elvis' last movie was the dramatic film 'Change Of Habit', where he played a Doctor at an inner city hospital who falls in love with a nun played by Mary Tyler-Moore. One of only three songs in the film was the track 'Rubberneckin', which was remixed in 2003 and hit No.3. It was originally released as a double A side single with the Mac Davis penned song 'Don't Cry Daddy' in 1970 and reached No.3 for two weeks in March.

Tk42: Kentucky Rain (#9 - 1970)
Not since 1961 had Elvis scored six Top 10 singles in a year, and after his comeback special in 1968, he was back on the top of his musical game. The third of six top tens for him during 1970 was the No.9 single 'Kentucky Rain', which hit its peak in mid-May, and is another melancholy track which shows off his deep baritone voice.

For more information on the Australian Charts go to https://charts.elvis.com.au