Angela Lansbury was born on October 16th, 1925, London England, the daughter of an actress and the granddaughter of a high-ranking politician, Lansbury studied acting from her youth, departing for the United States as the Second World War began. She was contracted by MGM while still a teenager and nominated for an Academy Award for her first film, 'Gaslight' (1944). Two pictures later, she was again nominated for Best Supporting Actress, this time for 'The Picture of Dorian Gray' (1945). Now established as a supporting player of quality, she began a long career, often as 'the other woman' in major productions and as the leading lady in lesser films. Her features, while not at all old-appearing, gave her an air of maturity that allowed her to pass as much older than she actually was, and she began playing mother roles, often to players of her own age, while yet in her thirties. She concentrated more and more on stage work, achieving notable success in a number of Broadway plays and musicals, winning four Tony Awards in sixteen years. Although active in television since the early 1950s, she obtained her greatest fame in the 1980s by starring in the light mystery program 'Murder, She Wrote' (1984). As Jessica Fletcher, she became known and loved by millions for well over a decade. She also became known for the odd fact of almost annual Emmy Award nominations for the role without ever winning for it. An institution in American theatre and television, she is also an inspiration for the graciousness of her personality, which is often exploited and always admired.

Elvis Presley fans of course know her for her role as Elvis' mother, Sarah Lee Gates, in Blue Hawaii. 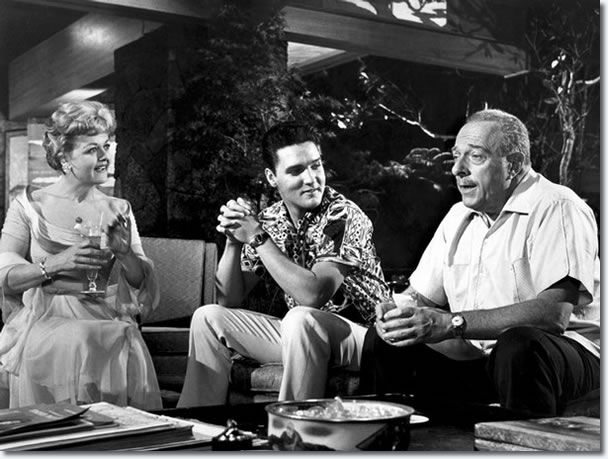 Sarah Lee Gates: Now Chadwick's home, I'm sure he's got all that foolishness out of his system, after the war.
Fred Gates: Sarah Lee, how many times do I have to tell you, he was not in a war.
Sarah Lee Gates: I know you're right, Daddy, but if I don't tell myself there was a war, I have a most depressive feeling Chadwick's just wasted two years.

Chad Gates: I like my job, mum. It's fun, it's interesting and I meet a lot of nice people.
Sarah Lee Gates: Nonsense. Tourists aren't people. They're... They're tourists.

Sarah Lee Gates: And he didn't even give his momma any goodnight sugar.

Sarah Lee Gates: My boy's back from the big house.
Fred Gates: Sara Lee will you stop watching those old movies!

Sarah Lee Gates: Chad thinks of who you are, remember you come from a fine family.
Chad Gates: I'm sure you'll do enough remembering for both of us.
Sarah Lee Gates: Oh daddy, what did we do wrong?
Fred Gates: Offhand I'd say we got married.

Sarah Lee Gates: [after seeing Chad and Maile dancing to "Rock a Hulla"] Daddy, I'm going to have a headache. A dreadful headache!

Sarah Lee Gates: I woke up when I heard our dog barking, and I thought Chadwick was coming in then. But then I realized that it couldn't be, 'cause we don't have a dog.