Glen Glenn was born Glen Troutman in Joplin, MO (10-24-34). In 1948, his family relocated to the then very rural area of San Dimas, about thirty miles east of Los Angeles. Glenn has resided in that general area, otherwise known as 'The Inland Empire', ever since. 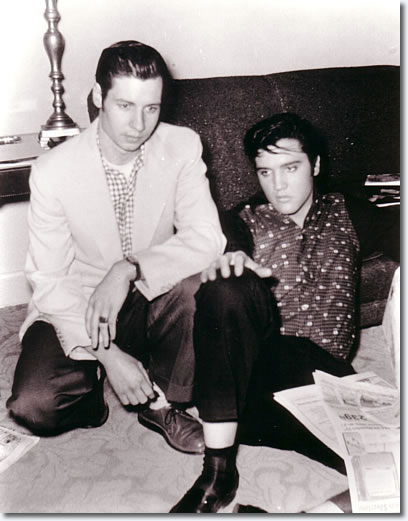 Glen's music started in c.1952/1953 and his first professional appearances came shortly thereafter, though he didn't become a recording artist until 1957.

Before his recording career began in 1957, he appeared live on various local and national radio and TV shows from which several songs were recorded live, including a convincing version of 'Shake Rattle & Roll' on the ABC-TV Show 'Ozark Jamboree' from July, 1956.

Now for the first time we have previously unpublished details of Glen's meeting with the yet to be crowned King Of Rock and Roll. Glen has photographs with many famous performers. What makes them unique is the time frame that these photos were taken. 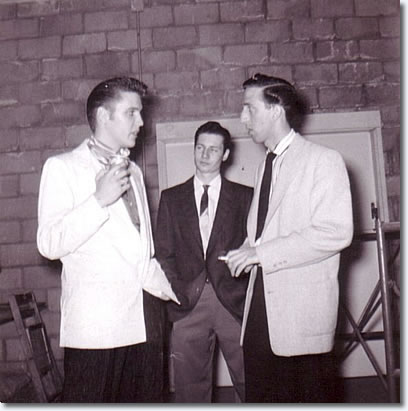 Glen met Elvis Presley on April 4, 1956 at the Arena in San Diego, California.

Just the night before Elvis appeared on the Milton Berle Show on the deck of the U.S.S. Hancock. Elvis had performed his last Louisiana Hayride Show only four days before and 'Heartbreak Hotel' wouldn't hit number one until the end of the month on April 28th.

In 1955 Glen remembers 'Fred Maddox came back from a Louisiana Hayride Show and told me I should listen to this kid singing'. Up to this point Glen had only done country-western music from his heroes Ray Price, Carl Smith, Ernest Tubb and his all time favorite Hank Williams. Later Glen ordered some Sun Records of Elvis and started performing them on the show with Maddox Brothers & Rose. 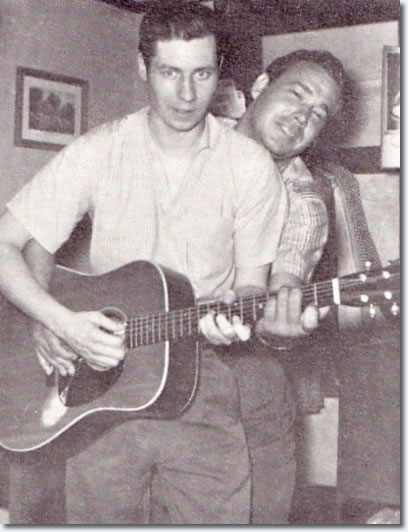 On April 2 Fred Maddox called Glen and Gary telling them to come to San Diego if they were interested in meeting Elvis. Glen, Gary Lambert (Glen's Guitarist) and his girlfriend Jean and her sister Carolyn Smith drove down to San Diego in Gary's Buick. Both Jean & Carolyn would be back-up singers on Glen's records on Era, and Jean would later become Gary's wife. On the trip down Glen thought 'I've seen other acts play at the Arena, it seems a big place I doubt he'll fill it'.

They arrived and they found the place packed. Glen and Gary approached Fred Maddox who was at the front of the stage. Fred suggested they come back and meet Elvis prior to the show, but said 'I want to see the show, I'll go back after'. Fred asked the security guard to remember their faces for later. The comedian came out to warm up the crowd, yet there was only one thing that would warm them up. After the mostly female audience boo-ed him off, Elvis came out to a screaming house.

Glen recalls 'Presley went wild, the girls never stopped. You could hardly hear Elvis over the noise'. Glen had never heard such a reaction to an artist, even being on show with some of the biggest country singers of the day. Glen laughs 'That's when I decided, this is what I've gotta do!' 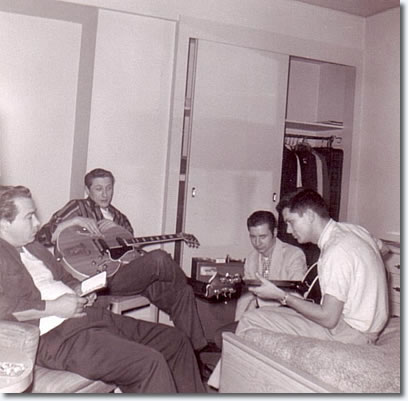 After the show they thought that the chance of meeting Elvis was extremely slim. Glen and his friends made it through the crowd to the guard who remembered them and let them back. Once backstage Glen and Gary saw Fred Maddox talking with Bill Black. Elvis was unable to leave as fans surrounded the building. After freshening up, Elvis entered the hallway. 'He was nervous and quite shy, but after a while he warmed up' Glen said. Glen spoke to Elvis about other singers they'd both worked with like Jim and Maxine Brown and Glen's cousin Porter Wagoner. Glen asked Gary to take a photo with his brownie camera. Some of the photos were taken by a Professional photographer (later Glen asked for copies and the photographer offered to sell the negatives for twenty dollars, at the time he almost refused, but decided to buy them).

'If it hadn't been for Fred Maddox's friendship with Bill Black, I'd never have met Elvis' Glen states. Glen became very friendly with Bill Black who came over to hang out and stayed at Glen's when he was in town. Bill invited Glen to drop by the Knickerbocker Hotel in Hollywood. On February 7, 1957 Glen and Gary dropped by to see Bill, Scotty Moore and DJ. Fontana They phoned from Bill's room to see if Elvis was in his room and luckily he was. The photo of Elvis and Glen sitting on the floor was taken that day. Glen said 'We were sitting around talking and Elvis played some acetates from Loving You'. Elvis had just seen Glen singing on the TV Show 'Cal's Corral' and thanked him for singing his song 'Baby Let's Play House' (which is still Glen's favorite Elvis song). After Elvis went in the army Glen never saw Elvis again.

I asked Glen if he thought when he met Elvis did he believe he'd be as legendary as he has become Glen said 'I didn't when I met him in San Diego, in Hollywood I knew he was doing very well at that time. But who would have dreamed he would be what he is today'.

More pictures of Glen and Elvis (among many other vintage pictures) are in the 68 page booklet in Glen's new CD on Bear Family!