Let's cut to March 1, 1974 -- wild crowd hysteria and the Elvis Presley touring colossus hits Tulsa, Oklahoma -- 2001 intro, then an high-octane 'See See Rider' kicks in -- it's infectious, cutting bluesy riff sounds fabulous and there's an awesome ripping James Burton solo ... fabulous all the way to the final Ronnie Tutt cymbal crash. It's almost 1972 again and, 'I Got A Woman' Elvis then comments: 'Good evening! It's a real pleasure to be here in this beautiful place'. However, chat is kept to a bare minimum because it's strictly down to business and the TCB band were never tighter than '74 after being honed on multiple live shows through the early 1970s.

With the band's recent new addition, Duke Bardwell on bass, Elvis and his Band rocked the Mabee Special Events centre, Oral Roberts University (Oral Roberts was one of America's most famous conservative preachers) with standouts: James Burton's delicious, funkier than a mosquito's tweeter wah-wah guitar on 'Hound Dog'. Elvis say's: 'Go down to Louisiana James' - that's Burton's cue and a smattering of authentic Chuck Berry licks on a rollicking 'Johnny B. Goode' - 'play it, James!' Moreover, Burton gets to further display his full-guitar repertoire with red-hot country licks, and shaft inspired, wah-wah drenched funk on a delicious version of Olivia Newton John's smash hit of the day 'Let Me Be There'.

NOTE FROM BOOKLET: 'Hysteria to Elvis Presley's Tulsa show likened to tossing Christians to the lions'.

The Follow That Dream release, Sold Out! 2-CD On Tour 1974, includes an additional 1974 soundboard from June 21, Cleveland Ohio, and fantastic additional artwork and liner notes. The hysteria surrounding the March/June tour of '74 and the story of Elvis performing at the Mabee Special Events Center (Oral Roberts University) is captured perfectly by Robert Frieser's sourced text and the included press reviews ...

Matching heavyweights – Led Zeppelin, The Eagles And Fleetwood Mac - 1974 was a heavy touring year for the King with a full performance itinerary including SOLD OUT city-to-city shows and additional Las Vegas and Lake Tahoe stands. Due to public demand extra shows were added increasing his workload - the staggering amount of SOLD OUT shows from March 1, and all through October numbered almost 200 (Elvis loved singing and it was his lifeblood but maybe a little savoir-faire was needed regarding rest days?) Enjoying the new SOLD OUT release however - it has to be said - it contains two of the BEST soundboards EVER released by the collectors label! Not only is the Tulsa show dynamite, but moreover Cleveland is also a compelling listen. Nevertheless, the Tulsa, Oklahoma show has the marginally better sound quality.

Sounding almost like a multi-track recording, what's intriguing here is the FTD team seem to have sourced exceptional sound quality, with in particular the Tulsa show continuing to surprise with defined bass and instrument clarity. Case in point: 'Polk Salad Annie's' funky bass is a real treat adding much more enjoyment to the performance. Just listen @17 seconds to Duke Bardwell's fabulous bass ... 'Down in Louisiana, where the alligators grow so mean, lived a girl that a swear to the world, made the alligators look tame. Polk Salad Annie, gator got your granny. Everybody said it was a shame, that mama was a working on the chain gang'. And it must be said Duke's playing is a joy throughout - funky and throbbing without being overblown. The upshot is the show's mix is VERY balanced, belonging in the very top echelons of soundboard releases.

More standouts: an enjoyable 'Sweet Caroline' with a strong ending, and an epic 'American Trilogy' - the equal of his very best versions ...James Burton shines once more on a sublime 'Funny How Time Slips Away' before Elvis thanks, Oral Roberts and his family for the use of the University (See booklet which is a riveting read full of facts - there was even a bomb scare threat during the run up to the show! (Robert Frieser's excellent liner notes add considerable weight to this captivating release, while additional Hans Slebos artwork and design deserve high praise ...) - Elvis finishes with an obligatory 'Can't Help Falling In Love' with more superb bass from Duke Bardwell and the final Al Dvorin announcements (Elvis super souvenirs anyone?)

CD-2 - Cleveland, Ohio has a noticeable bass heavy mix, but nonetheless, it's very smooth sounding after multiple plays and is a very interesting show. Elvis karate-chopped onto the stage to start 'See See Rider' and there's more between song banter (likewise adjust treble settings.) A press headline reads: 'Elvis Still Has That Wiggling Charm' - Unfortunately James Burton's guitar is much lower in the mix but nonetheless it doesn't spoil the enjoyment. It still features prominently on multiple songs. But most notably lacking on the aforementioned 'See See Rider' and 'Polk' -- Of course, this is a very fine show with a fantastic 'Trying To Get To You' - his voice sounds fabulously rich and full with keyboards heard in the mix. The show is similar in feel to the Live In L.A. FTD, but with much-improved sound - Elvis amusingly introduces himself as 'Elvin Paisley' and he sounds relaxed and in great spirits throughout the show. After he finishes 'Polk Salad Annie' amid crowd shouts of, 'I love you' - he apologizes for the mic cut-out and sits down on a monitor to chat and catch his breath among the crowd hysteria. A fan tries to take one of his boots ... (there are great photos of Elvis wearing his $10,000 peacock suit with incredibly detailed, hand-embroidered gold thread from the show in the booklet). The gospel classic 'Why Me Lord' is introduced and sounds fabulous here, and is a step-up from the Tulsa version.

More standouts: a great version of 'Bridge Over Troubled Water' and 'Big Boss Man' - and even a few lines of the melancholy blues - 'Good Time Charlie's Got The Blues' gets tossed in too. Then his standard closer and closing vamp. The bonus song 'Turn Around, Look At Me' (four lines only), Louisiana Baton Rouge June 17, sends chills! This time Elvis say's: 'I'm Arvis Paisley' before the opening lyric: 'There's someone, walking behind you. Turn Around, look at me' -- it's fantastic but only short and a great shame that he didn't perform more of the song. (Note: The Vogues had a hit with the song in the 1960s, although Elvis was probably more familiar with the 1961 hit version by Glen Campbell) - Elvis brings a poignancy to the performance which obviously hit home with thousands of screaming fans asking him to turn around ... Elvis was in the public glare and experienced mass adoration all his life ... That said, what's a definite knock-out about this release is the captivating text in the aforementioned booklet and the memorabilia. It's a 1970s time- capsule - There are tickets from the actual shows besides photos of Elvis from both March gigs and additional photos from various May/June concerts. The release resembles the Prince From Another release, behind the CD placement with captivating recreated press reports, besides a neat touch with the 1974 tour schedule for band members printed on the CD discs themselves: (Depart: 7.00 Pm Holiday Airlines - Arrive: Tulsa, 2.00 Am Camelot Inn - Building: Special Events Centre - Oral Roberts University).

Furthermore, the excellent CD package will undoubtedly transport you back to the wonderful 1970s era, and the wild fan hysteria surrounding the 1974 tours. Security guards broke ribs and one female fan broke both legs jumping from a balcony overcome with excitement ... Robert Frieser's compelling text about the two soundboard concerts and the Oral Roberts connection is a fascinating read ...

All things considered SOLD OUT ticks all the boxes: great soundboard sound - compelling liner notes and artwork - and unreleased shows to boot. Hans, Robert, Jan Eliasson at Audio Planet, and the FTD team deserve Much praise for this most excellent FTD release.

NOTE: QUOTE from SOLD OUT! - TULSA press review from 1974 - Elvis Show Has Only One Drawback - It's Just Not Long Enough -- The man from Miss ... Didn't disappoint 11,000 of his fans Friday night at the Mabee Center. Sporting a white sequinned outfit and passing out blue scarfs like a garment merchant, Elvis Presley went through the hip-thrusting moments and blues material which made him a scandal 20 years ago. Predictably, security personnel had some difficulty in restraining screaming women from rushing the stage for a handshake, scarf, or a glance of old. Probably the only drawback for most of the fans was the brevity of the show. Elvis did a variety of songs, ranging from his old hits to country, blues and gospel tunes, but his set only lasted 45 minutes. In addition, two of his backup groups weren't shown to their fullest advantage. Both did, however, add volume and texture to the Elvis part of the show. JD Sumner, an incredible bass singer, led in an earthshaking version of Kris Kristofferson's 'Why Me Lord' and his voice was used again to advantage with Elvis in an outstanding rendition of 'Let Me Be There'.

Elvis seemed to enjoy performing but seemed somewhat perfunctory in rehashing his bump and grind numbers of old. He was more at home singing jazz ditties like 'Fever', country songs like Willie Nelson's 'Funny How Time Slips Away' and gospel tunes, all of which meant nowhere as much as the winks, the easy grins, and the matador-like stances. His band was top- notch and James Burton, who only got a smattering of applause when introduced played a crisp and raunchy guitar. The emcee rightfully boasted that the Elvis show starts on time, runs on time, and finishes on time. Very much evidently like a Swiss watch.

It's flattering to realize that Presley, whose last performance in Tulsa was at the end of a tour. Chose Tulsa to kick of his present tour, including two shows at the Houston Astrodome.

And yet, the question remains. Are audiences coming for Elvis the musician, with his splendid group of artists, or for Elvis the personality? At times Friday night, it seemed the audience could have been stricken deaf and would have enjoyed the show almost as much.-- DAVID C. MacKENZIE. 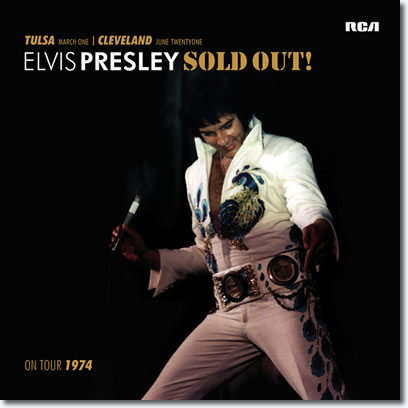 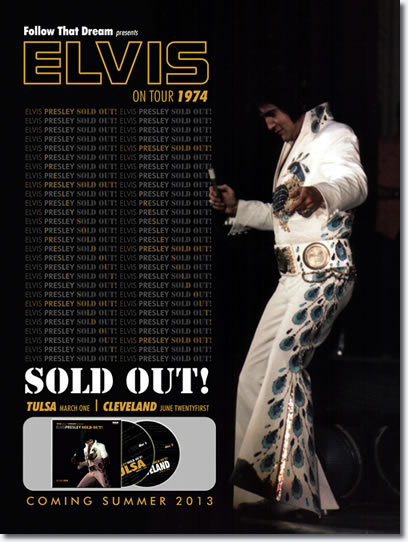