Bill Black's main stand-up bass is today owned by ex-Beatle Paul McCartney, who received the instrument as a birthday present from his late wife Linda McCartney in the late 1970s.

The bass can be seen in the video clip to McCartney's song 'Baby's Request'. In the documentary film In the World Tonight, McCartney can be seen playing the bass and singing his version of 'Heartbreak Hotel'. In 1995, he played it on 'Real Love', the last 'new' Beatles record (one of two in which McCartney, George Harrison and Ringo Starr overdubbed a full arrangement onto a John Lennon home recording from the late 1970s).

When Nancy Shockley was 4 or 5, she would sometimes awaken in the night to the sound of her father coming home from work, his big 'doghouse' bass bumping the furniture.

Sometimes she would climb on it and ride it like a pony before her mother chased her off.

To the world, her father was Bill Black, bass player for Elvis Presley in those early, heady days of the mid-1950s when Elvis was swiveling and shaking his way toward a music that would rock the world.

To Shockley, 56, Black was a doting dad, a working-class guy who could give her only a little time before he died of a brain tumor in 1965. His studio and instruments were sold when she was still a child.

She now lives in Covington with her husband, William Shockley, where they own a company that levels ground and prepares sites for construction. She never knew what happened to the bass until the late '70s when Rolling Stone reported that Paul McCartney had it.

Last month, about 30 years later, Shockley and the bass were reunited in a remarkable interlude spent with McCartney, the former Beatle, at his studio in England. Sir Paul sang to her, posed for photos and even plucked a few notes of her dad's old part on 'Heartbreak Hotel'.

Shockley's first attempt to reach McCartney after seeing the article in the '70s was unsuccessful. She let it go. But the bass did not let her go.

Years later, in Oct. 2006, it turned up again in the arms of McCartney on an episode of PBS's Great Performances.

In the clip McCartney, performing at London's Abbey Road studios, literally unveiled the instrument and presented it as the 'original Elvis Presley bass', with its 'dashing white trim', he said, that was 'played by Bill Black'.

The bass, identified as a Maestro M-1 Kay model was taped at the edges, probably for protection at first, then painted white. 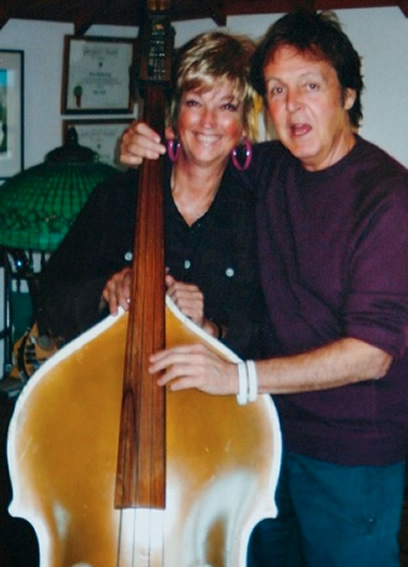 McCartney said when Elvis, Scotty Moore and Black toured the region, Elvis drove and the bass rode on the roof of the vehicle. McCartney then sang and played 'Heartbreak Hotel' on the bass.

Shockley said Gail Pollock, longtime friend and assistant to Moore, gave her a contact for McCartney. Shockley wrote and this time received a letter inviting her to visit McCartney in England. She and her husband arrived in London, Nov. 14, for a four-day stay.

The couple, traveling south by train, were 'collected', as the English say, by an assistant to McCartney and taken in a van to a recording studio overlooking the English Channel.

Shockley said she wasn't told the name of the studio and declined to provide full details out of concern for McCartney's privacy.

But she was almost certainly at his Hogs Hill Mill studio in a restored windmill in a village near Hastings.

The couple was offered tea and sandwiches in a kitchen there, and as Shockley gazed out the window, she heard a voice behind her that seemed to come out of the past, say, 'Nancy has come to see her daddy's bass'.

It was McCartney, casually dressed in jean and loafers. 'I almost cried he was so nice', said Shockley. 'I immediately felt like this was someone I should have met a long time ago. It was like seeing an old friend'.

McCartney led the couple to an upstairs room, apparently an office, where the old bass waited. Shockley choked back tears, and McCartney told her, 'Let it go, love'.

The three remained there for a time saying little. For Shockley, the silent bass played memories of her father, a former employee at the old North Memphis Firestone plant, who had a musical bent. He was also funny and his stage clowning was often crucial in warming up 1950s crowds for what seemed then like a pretty wild Elvis.

The Blacks lived near the Firestone plant until Shockley was about 5 years old, she said, then moved to Pikes Peak Street, off Jackson and a few years later to Frayser. Her mother was Evelyn Steele Black, who died in 2002. Shockley has a sister, Leigh Ann Porterfield of Memphis, and a brother Louis Black of Atoka.

Shockley remembers Elvis coming to her house on Pikes Peak when she was a child and talking business with her dad. She wondered why his car, parked outside, drew curious folks from the neighborhood, and why women had written phone numbers on it with lipstick.

Even after Bill Black left Elvis in 1958, Black was still on the road with his band Bill Black's Combo, and had several hits, including 'White Silver Sands' and 'Josephine'. Shockley knew him mostly during the last two years of his life, after he stopped touring.

Shockley imagines the bass stirred memories for McCartney too. It was a gift from Linda McCartney, his wife of 29 years.

Black had sold his bass around 1962 to Mike Leech of The Memphis Boys and it remained in Leech's attic until sometime in the late '70s when it was sold to music publisher Buddy Killen, possibly for purchase by Linda McCartney.

A PBS.org article states that McCartney used the vintage bass on 'Free as a Bird' and 'Real Love', songs he recorded in 1995 with the two remaining Beatles, George Harrison and Ringo Starr.

McCartney later posed for photos with the Shockleys and played a little of 'Heartbreak Hotel' for them. 'That's why I have a big grin on my face', said Shockley, about one of the photos.

Later he showed them some of the instruments in the studio, including some used in original Beatles' recordings, and played and sang a bit of 'Lady Madonna'.

The visit lasted about 11/2 hours, said Shockley, and then the couple was taken back to the train station.

Graceland owns Elvis' 1956 Gibson. Only one of his Martins used from 1954-56 has surfaced and was owned by a Seattle man the last time he heard.

Shockley said folks in the Memphis music community sometimes ask her about the bass and whether she would like to have it back in the family. Sure she would, she said.

'But it's in the best hands it could be right now', with McCartney, she said. 'He takes care of it. He loves it. He keeps it alive. And I would like it to stay with him'.