Linda Thompson was born May 23, 1950 in Memphis, Tennessee. Linda won several beauty pageants, including the 1972 Miss Tennessee USA title. In July of that year she began a relationship with the recently separated Elvis Presley and immediately moved in with him at Graceland for roughly three and a half years.

In 1981, Linda Thompson married former Olympic Games Gold Medalist, Bruce Jenner with whom she had two children. Bruce divorced Linda in 1983 and she appeared in a few motion pictures and made a number of guest appearances on different television series. In 1991 she married composer David Foster.

With her new husband's help, she began writing lyrics for some of his compositions, notably the song 'No Explanation' for the 1990 film, Pretty Woman. In 1992 they were nominated for a Grammy Award and an Academy Award for Best Song for their composition of the song 'I Have Nothing' sung by Whitney Houston in the 1992 motion picture, The Bodyguard. [Linda wrote poems during her time with Elvis and offered to hsave them put to music for him but he refused, thus sadly missing out on some good song contibutions.]

Elvis was a very tender soul. He had such a good heart. We literally bought out a pet shop one night. Elvis paid for about 20 dogs, just gave them out to his friends. And we kept this chow, little Getlow. He was a beautiful dog, but Elvis was going to get rid of him because we read an article that said chows turn on their masters 80 percent of the time. Elvis said, 'I don't want to have to be worried about leaving this dog with you, or come home and find you have to have plastic surgery'. But I said, 'Oh, give the little fella a chance. He may turn out all right'. So I raised him, and he turned out to be as gentle as a kitten. He was our sweetheart. But he had a congenital kidney ailment. I don't know if that made him so lethargic he didn't feel like being mean, but he had a wonderful disposition. About three o'clock one morning, Getlow was acting really strange, so we had a doctor come over. He said, 'I don't think the dog will make it through the night'. So Elvis leased a Learjet and flew Getlow, my girlfriend, Jeannie LeMay and me, and the doctor up to Boston to a special clinic for kidney dialysis. We left him up there for about three months. But he didn't live long after that. He was only about a year old. We were on tour when he died, and we were coming home on his plane when they told us. Elvis just cried. 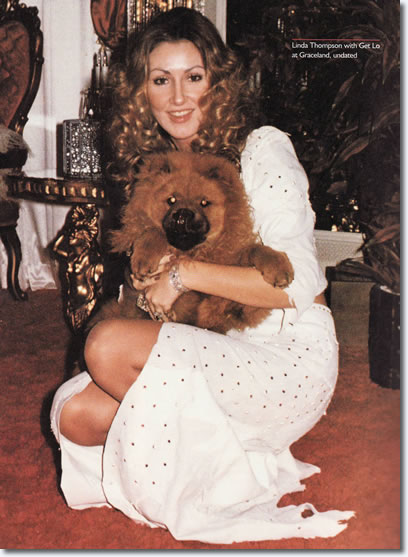 August 7, 1975 : Arrangements are made for Linda Thompson and her friend, Jeannie LeMay, to fly with Elvis' chow, Getlow, to Boston, so that the dog can receive treatment for a kidney ailment. When the dog is too ill to travel on to the West Boylston veterinary hospital where it is scheduled to be treated, the whole party remains at the Ritz for two days before continuing.

October 21, 1975 : Milo High flies Elvis' aunt, Delta Biggs, and Mike McGregor to Boston to pick up Elvis' chow, Getlow, who has been recuperating at the New England Institute for Comparative Medicine veterinary hospital in West Boylston for almost three months. 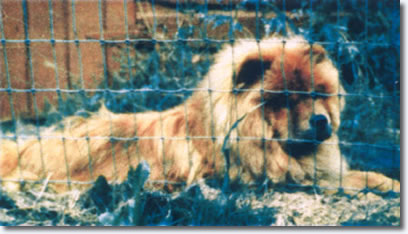 Getlow at the Animal Medical Center.

I was with him for four and a half years, from 1972 to 1976. He surrounded himself with people whom he loved and trusted, because he was so secluded from the world, and so sheltered. But a lot of people got very greedy. I think that's one reason Elvis felt lonely at times, he realized that even if they cared about him, they still lost sight of him as a human being. He would get depressed because he felt people didn't love him for being the simple person he was. They forgot about him as just a regular person with feelings like all of us.

I think it's a terrible thing for people to say they couldn't imagine Elvis growing old. Everybody has that right, even if they're a sex symbol. He wanted to live to be an old man. He wanted to see Lisa have children, and he wanted to see his grandchildren. He had no idea he would die so young. 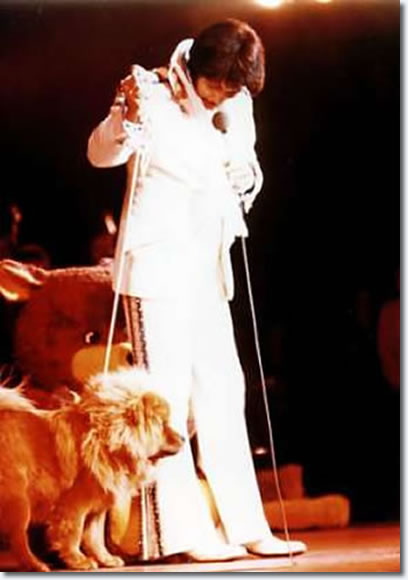 Elvis and Getlow on stage.

One morning at about seven we were lying in bed, and I felt something wasn't right. His breathing was strange. I shook him, and I said, 'Honey, are you okay?' And he said, 'I can't get my breath!' He had pneumonia. I called for the nurse, and she brought some oxygen over, and we had to rush him to the hospital. I stayed with him for two and a half weeks. Whenever he went to the hospital, I went to the hospital.

So it was 'we' went to the hospital. Elvis needed more love and care than anybody I've ever met. Probably more than anybody in this world ever has. Because he was who he was, and what he was, and yet he had come from obscurity, from Tupelo, Mississippi, and poor parents. And he did enjoy having a mother image around him. But I think it's wonderful if you can be all things to each other. And he and I were. He called me 'Mommy'. And he was like my father at times. And we were like brother and sister at times, and we were like lovers at times. It was a full, rich relationship. For a long time, we didn't need anybody else, really. I truly, truly loved him, and I wouldn't have cared if he were John Doe. I loved him as a human soul. He was really a wonderful person. We often thought it would be fun to just go away and live in a little shack on a farm and just forget fame and fortune and all the craziness that goes with it.