Mary Ann Mobley apparently is something of a Southern toughie herself. The 5-foot-5 Miss Mississippi of 1958 was the first flower of the Magnolia State to blossom into a Miss America, in 1959. Mobley's most popular movies remain her Elvis musicals, MGM's colorful Girl Happy, and Harum Scarum. Mobley is seventh-billed in the opening credits of 'Girl Happy', but she steals the show (and almost steals Elvis) from headlining actress Shelly Fabares.

Elvis and I felt a common bond, coming from Mississippi. He thought I understood him. He didn't have to put on airs with me, and I wasn't after anything. This is an odd thing to say about Elvis Presley, but it was like I was working with my brother. We never dated. We were just two people from the same state. The first day I came on the set of Girl Happy, in 1964, Elvis got up and he came to me, and he said, 'Hi, I'm Elvis'. Like I didn't know! Mary Ann recalls. Elvis said, 'Where is Mary Ann's chair?' All of a sudden a chair appeared with my name on it. That was the beginning of our friendship. I was 25 and he was 29. He and I would talk, and he asked me did I ever wonder about things that happened in my life. I said all the time. And he said, 'Well, I do, too, especially about why I lived and my twin, Jessie Garon, didn't'. 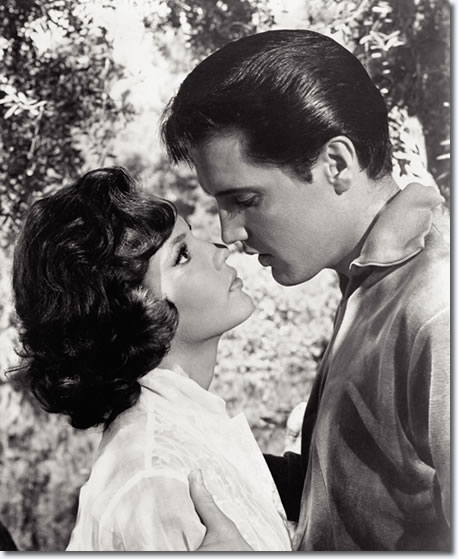 I think he put women in two categories. You were either one of the girls, or you were a lady.

Once Priscilla had Lisa Marie in 1968, she became a Madonna figure for him.

And I think that maybe one reason why they split up. In Mississippi, he was taught to be kind and take care of ladies, and then he had the other constantly thrown at him. He used to say to me, 'Mary Ann, one day I'm going to have a party I can invite you to'. I took that as a compliment. And I never will forget, once one of the boys said 'damn' in front of me, and Elvis said, 'You never cuss in front of a lady'.

Elvis would joke about the movies. When we were making 'Harum Scarum', he said, 'This isn't going to change history, is it?' The sad thing is that Elvis was a better actor than the movies allowed him to be. He could have been great. I was told that much earlier when Elvis was dating Natalie Wood, the director Elia Kazan offered him the lead opposite Natalie in Splendor in the Grass. And Colonel Tom refused. 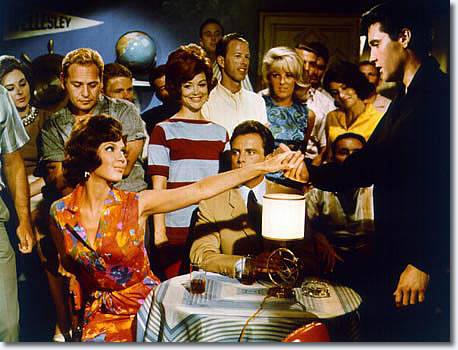 In Girl Happy, Mobley plays tight-skirted and often bikini-clad Deena, who inspires three of Presley's most seductive one-on-one songs, including Do Not Disturb ('Let's take the phone off the hook/ Turn the lights way down low/ Baby, put down that book/ Tell the maid to go'.). Eventually, Deena exits the picture, writing 'Drop Dead!' in lipstick on Elvis' bathroom mirror.

In 'Harum Scarum', Mobley was promoted to Elvis Girl No. 1. She plays naive Princess Shalimar, who wears diaphanous veils, pearls and other 'I Dream of Jeannie' accouterments -- or, 'about 17 million yards of orange chiffon and I don't know how many pounds of fake hair', Mobley says today. The Middle Eastern look worked for Elvis, who plays movie star and 'infidel pig' Johnny Tyronne.If you're the result of resisting the encroachment of our civilized world, I'm all for it', leers Johnny, who enjoys serenading the princess at the Pool of Omar when he's not karate-chopping leopards or sneaking into the Palace of Jackals for 'an Arabian rumble'.

Mobley said she preferred the Scheherazadesque more-than-seven-veils coverage of 'Harum Scarum' to the fabric-challenged poolside outfits she was required to wear in 'Girl Happy'. 'Let's face it, I never felt comfortable in a swimsuit, whether it was Miss Mississippi or on a set. I am not one of those who thought it was an assault on feminism or something, I'm just uncomfortable. I admire those women who feel their bodies are perfect and are comfortable in a swimsuit, but I never had that luxury. But now I'm glad that 'Girl Happy' is coming out on DVD because it'll be the only time my grandchildren get to see grandma in a swimsuit'.

Mobley said working on 'Harum Scarum' was shot in 28 days (a lavish schedule for a Katzman film), but was more like 'going to the circus every day' than going to a film set, thanks to the antics of Elvis and such characters as Jay Novello as Zacha the con artist and dwarf actor Billy Barty as Baba the cut-purse.

The script said, 'Princess Shalimar gallops across the landscape on the back of an Arabian stallion, with her long hair and veils flying in the wind'. Mr. Sam called me into his office and asked if I rode a horse, and when I said I did, he said, 'Good, we don't have to hire a stunt double'.

The horse was no pussycat, however. I go out to the horse and there is an old wrangler out there, chewin' and whittlin', and he looks up at me with all this orange chiffon on, and he says, 'You ridin' this horse?' And I said, 'Yessir'. And he said, 'Just remember one thing -- it' ain't my idea'. And that horse took off like lightning. That horse never had four feet on the ground the whole time I was riding. Elvis was saying, 'Slow down, Mary Ann'. I thought, 'This is gonna be embarrassing when they pick me off the limb of a tree'.

In 'Harum Scarum', the Elvis-smitten Mobley moons over 'the touch of his gentle lips', but offscreen there was no lip-touching with Presley, Mobley said. 'People are very disappointed about that, and they don't understand why, and I'm not sure I understand why', she said. Instead, of romance, she and Presley shared 'a wonderful friendship' that lasted throughout the 'kind and gracious' singer's life.

'I'll forever be indebted to Elvis', Mobley said. We'd sit around and talk, and we really did have a unique friendship. He said, 'Ma'am, someday I'm gonna have a party that I can invite you to'. Whenever he had to change his phone number, somebody would call and say, 'Ma'am, we got a new number at the house, and Elvis wanted you to have it in case you ever need him'.

On 'Girl Happy' Mobley said, Elvis helped her get over her insecurity as an actress. 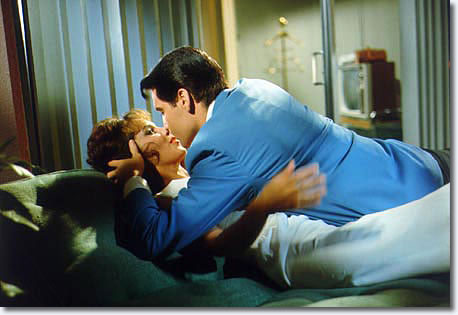 'The first day I came onto the set I was nervous because it was my first movie... I thought I was not pretty enough to be in movies, but I loved doing musicals, so when I was asked to do this movie with Elvis, I said, 'I'm not giving up my apartment in New York because once they get a look at me they'll send me back'.

In one scene in the film, an angry Mobley hurls a vase at Elvis. It was one of those sugar vases that doesn't hurt you, but I'm supposed to miss him'. Instead, Elvis was beaned. He said, 'Mary Ann, you're supposed to miss me', and I said, 'Yeah, but you forget I played softball in Brandon, Mississippi'.

'He said, 'Mary Ann, do you ever wonder how you're gonna be remembered?' And I said, 'Yes', and he said, 'So do I'. And I think if he could just know -- and I hope he does somewhere -- that all these people are coming to Memphis, that he has made such an impact... I think of Marilyn Monroe and I think of any name that had a life of its own, and yes, they had a cult following, but no one has had the following Elvis has. I'm so glad I knew him and I'm so glad I got to work with him and I'm so glad we're both from Mississippi'.