Ever since Good Times was released by the Follow That Dream label two years ago I've been looking forward to Promised Land getting the classic album treatment as well, and earlier this month it finally arrived. After listening to the two CD's packed with alternate takes and interesting studio dialog as well as some rehearsals and undubbed masters, I can say that it was definitely worth the wait.

I've always liked Promised Land with its mix of rock, pop, ballads, country, funk and gospel, all songs recorded during a session at Stax Studios in Memphis, December 10-16, 1973. The FTD version follows the by now well-known pattern with the original album and session highlights on disc 1 (including 'the alternate album') and more outtakes on disc 2. It's a proven concept that works well this time as well.

The original album takes off with Chuck Berry's great rocker 'Promised Land', and with the help of takes 2 to 6 we are offered a fly-on-the-wall experience of how it sounded when Elvis and his musicians recorded the song. One example of this is David Briggs trying out the intro on his electric piano, while Elvis asks if guitarist James Burton knows it. Another is the ending of the same take, having Elvis exclaiming, 'Don't look at me. There's no more verses!' as the second guitar solo goes on and on. As for the outtakes, I love the longer take 5 (the one before the master), which has Elvis singing nearly the whole song again after the second solo. 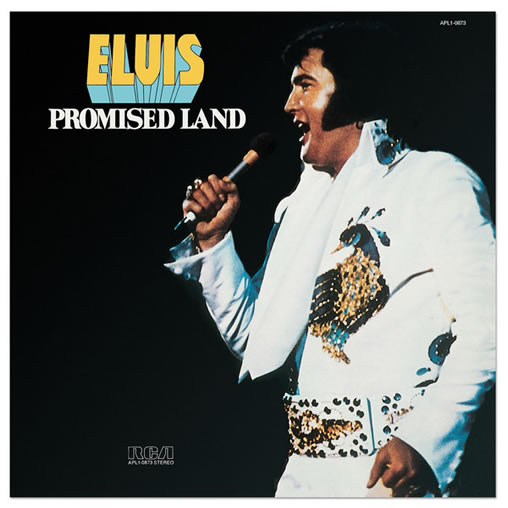 Take 1 of the moving country number 'There's A Honky Tonk Angel (Who Will Take Me Back In)' offers a more 'naked' version than later takes, mainly due to Elvis emotional singing. Just listen to the line 'Oh, when there's an old friend out there and she's waiting, yes she is' and you'll see what I mean. For some reason Elvis throws in an 'I love you' in falsetto after the line 'You never look at me and say I love you', destroying a nearly complete, beautiful take 7. But Elvis and the musicians share a laugh, and so do I.

Elvis nails 'Help Me' in one take, and according to Jerry Hopkins in his book Elvis: The Final Years, he dropped to his knees to sing it. The false start and remixed master offers no clues to if this statement is true, but Elvis does say 'Puh!' after the ending, something that can't be heard on the original master.

I've always thought of 'Mr. Songman' as the weakest track on Promised Land, and I guess Ernst Jorgensen feels the same, as no outtakes have been made available until the release of this version of the album. The four outtakes (three of them complete) does nothing to change my opinion, but all the studio dialog makes for an interesting listening experience all the same. There's playful banter between the musicians, Elvis and Kathy Westmoreland as David Briggs plays the electric piano for Felton Jarvis' benefit before the first take, and it's interesting to hear someone in the studio halting the third take with the words, 'Hold it, excuse me, I did it ... once again!' as he somehow makes a mistake at the beginning of the song.

Another song that hasn't been offered in any other format than the master before is 'Love Song Of The Year', (probably not a favorite of Ernst Jorgensen either, it isn't even mentioned when he describes the sessions in his book A Life In Music). But here we get the complete recording session, from the rehearsal and all through takes 1 to 7 (8 is the master). I haven't been a great admirer of this song either, but I have to admit that listening to the alternate takes has made me change my opinion.

Without the heavy overdubs, it's like a veil has been lifted from the song, exposing the real meaning of the lyrics. Take one is a great example of this, it sounds more sincere than the master as Elvis sings with great feeling, accompanied by a much more prominent sounding piano. And the rehearsal is really funny, with Elvis changing the lyrics, for example the line 'So I confess my loneliness' to 'So I confess I made a mess'.

'It's Midnight' was the first track on Side B of the original album, a dramatic ballad that Elvis clearly identified with, wringing every ounce of emotion out of it. (The previously unreleased takes 7 and 9 are good examples of this.)

But that didn't stop him from having a good time while recording it, something that becomes apparent while listening to the outtakes, especially the first ones. 'I've been rich since I was 21, it don't matter. I told you J.D. [Sumner], I've been a millionaire since 21, I don't care if we make it or not. It's just a hobby to me. Felton's working hard. (Laughing) You're all just starting to get rich and I'm blowing it for you', he jokes after the third take has been abandoned.

A song that took on a whole new meaning to me about a year ago is 'Your Love's Been A Long Time Coming', when my daughter was born. Thanks to Troy Y. I learned that the lyrics were about the songwriter's newborn daughter and not a woman. No new complete outtakes are included here, but a couple of long false starts once more show us what a good mood Elvis was in. About two minutes into take 3 he sings a 'be' instead of 'do' resulting in 'And I'm gonna tell everyone what good love can be-do-be-do-be-do-be-dooo' and then completely losing it, exclaiming, 'What's the difference between a 'be' and 'do' among friends?'

I've always counted 'If You Talk In Your Sleep' as one of the highlights on the original album, and take 5 is a firm favorite, with funky guitars, lots of bass and drums, electric piano, an organ sneaking up from behind, shouting girls, and above it all Elvis in firm command. The incomplete take 6 offers yet another chance to study Elvis at work in the studio, listening to him singing snippets of 'Find Out What's Happening' before the take and then hearing him cutting the take short with the words 'I lost my earphones, the earphones are gone to hell and back.' 'Thinking About You' is another great song from the album, and here we are treated with a rehearsal that leads to a swinging version ('Better quit Felton, they start playing jazz, man!'), as well as five alternate takes, three of them complete. In all fairness, the different outtakes sound very similar to my ears, but the previously unreleased take 6 is a real treat, a driving version that features two guitar solos at the end, with Elvis doing the chorus after each solo. The other takes only has Elvis singing the chorus once.

The original Promised Land album closed with the country flavored 'You Asked Me To', and the FTD treatment of the album includes no less than four complete outtakes. Two of them are previously unreleased, the first one, take 3A, once again showing Elvis in a good mood. 'Give me a key, or a sign', he says, as there is no intro in the song. Then follows the sound of a piano, bass and guitar, as the musicians try to be helpful. 'OK, that's enough, not to many keys, shit, I get confused', he laughs, then launches himself into yet another session highlight.

As you've probably guessed by now, Promised Land is another winner from FTD. But what's a review without some criticism? First and foremost, the first take of the title track is missing, probably due to the fact that Elvis changes the line 'And the poor boy is on the line'” into 'And the mother****** is on the line'. In a way this is a strange decision, as Elvis sings exactly the same thing on the second rehearsal version of 'Promised Land' included on the FTD release From Sunset To Vegas. [it was released on the bootleg, On A Jet To The Promised Land.] Another question mark is the composite version of 'There's A Honky Tonk Angel', spliced together from takes 5, 3 and 8. I think it would have been better to include the nearly complete take 3 instead, a take which apparently ends in a hilarious way. My third complaint is that the unedited master of 'Thinking About You' is missing. The edited master used on the original album was faded out before Elvis started to sing the chorus, something that became apparent when a longer edit was released on Our Memories Of Elvis Vol 2 in 1979.

These minor complaints out of the way, Promised Land is without a doubt one of the best releases from the Follow That Dream label this year. It's one that I will return to many times, together with Good Times and Raised On Rock, the other two classic albums making up what could be called 'The Stax Trilogy'.

The Sessions : The Making Of

Recorded in Memphis, Tennessee in December 1973.