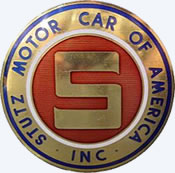 The Stutz Blackhawk was built on a Pontiac Grand Prix chassis, chosen for the GP's engine placement far back on the frame. In 1969 GM introduced a new 'A-special' platform with an exclusive 118 inch wheelbase which was later named the G-body.

So the Stutz Blackhawk started life in the United States as a Pontiac Grand Prix. It was then shipped to Italy to be converted. Only the engine and transmission were kept as the body was stripped away and a new body and coach work added - by hand - not machine, to transform the car into a Stutz Blackhawk.

The very first Stutz Blackhawk prototype was produced in 1969. The Stutz-founder, Mr. James D. O'Donnell, drove this car. Mr. O'Donnell bought the first Pontiac Grand Prix on October, 1st, 1968 that was shipped to italy and converted into the very first 'Stutz' prototype.

The second Stutz prototype was built in the Padane factory, Italy in 1969/1970, being completed in April 1970.

This was the first Stutz Blackhawk ever sold, and to none other than Elvis Presley. 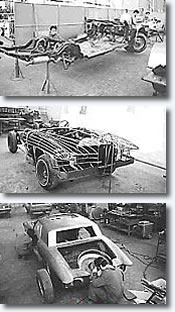 The most significant detail of the prototypes compared to the production cars that were produced starting in 1971, was the big rear-window. Only the two prototypes had the large size rear window.

The interior of the Stutz was very luxurious. The floor coverings were made of Australian lambs wool. Twenty four karat gold plates the bezels and moldings. Only the finest European leather covered the seats, and was used on the dash. The dash also consisted of beautiful English burl. The Stutz went through a six week long process with twenty-two coats of individually hand rubbed lacquer paint

The Stutz consisted of a GM TH400 transmission and GM 455 cubic inch V8 engine. With a horsepower of 425 the Stutz accelerated to sixty miles per hour in 8.4 seconds. The top speed of the Stutz was one hundred and thirty miles per hour. Fuel economy was just 8 miles per gallon.

Photos at right are of the Blackhawk prototype #2 under construction.

This second Stutz Blackhawk prototype was flown to the United States to demonstrate and display at car shows from which custom orders could be placed for cars to be made. That is until Elvis Presley decided he wanted the car!

Sonny West: Jules Meyers, the first Stutz-dealer showed up at Elvis' home at Hillcrest with the Blackhawk.

Jules Meyers tried to explain that this car was the very first Stutz, that he needed the car to show to potential buyers, to drive around, showing the beauty of the car. Elvis answered with a question: 'How do you think you will sell more cars, when you drive it, or when the people see ME driving it around?' Well, Jules saw the point ... Elvis got the car although it was shown at a motor show prior to delivery.

Jules Meyers: Elvis wanted to have the car, I told Elvis that there was a car show, in a couple of days, and that I would need the car for that. It was O.K. with Elvis, so the car was sold. Elvis also agreed to take some press-pictures with him and the car - good for publicity. Frank Sinatra was also interested in the car, but Sinatra would not agree to any pictures of the Stutz being taken with him and he would not agree to the car being displayed at the car-show. So it was obviously the better decision to sell the to Elvis Presley. 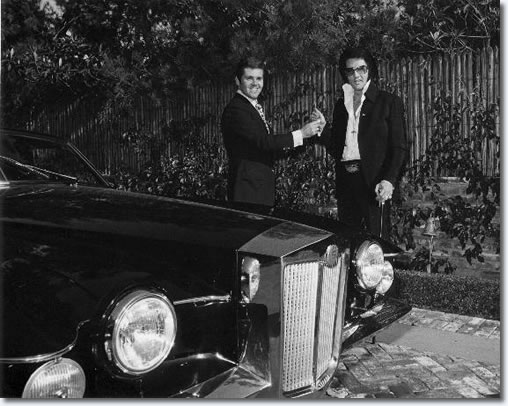 Jules Meyers hands Elvis the keys to his Stutz Blackhawk.

Elvis then immediately turned the car over to George Barris to further customize it. Elvis had for many years, had several motor vehicles designed and coach built by his friend, 'The King of Customizers' George Barris. 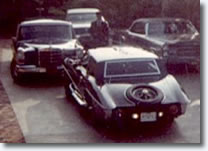 Unfortunately, this first Blackhawk car was involved in an accident on July 1, 1971 and the front was heavily damaged. Elvis had sent Sir Gerald, his L.A. chauffeur, out to have the car washed and it ended up in an accident. After that, Elvis put it in storage. Repairs to the car were not completed until the early 80s. Mr. O'Donnell, the founder of the new Stutz company helped to restore the car, after earlier advising that the car was 'a total wreck' and the only value this car now bears is one of salvage' and offered $1,000 for it in a written letter to Vernon Presley dated August 2, 1971. Being a prototype original parts were not available so the radiator grill and the front lights fitted are not original. 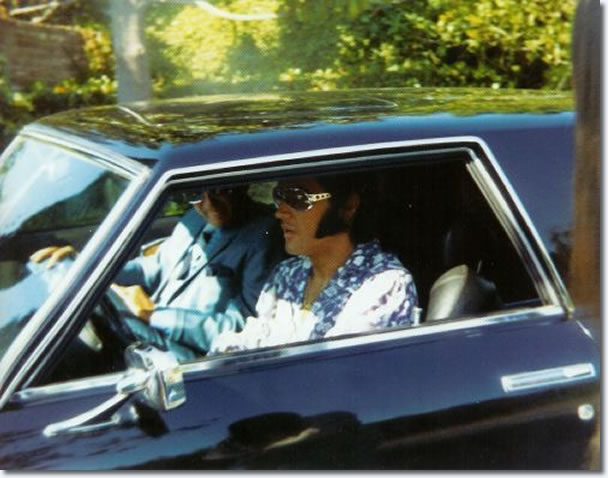 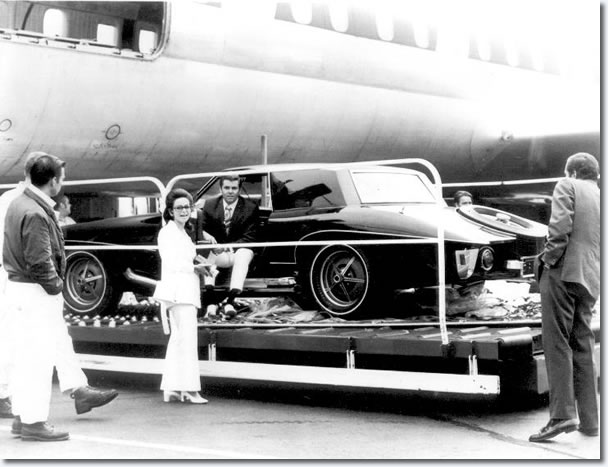 The Stutz Blackhawk prototype, that was sold to Elvis Presley, at the Airport. 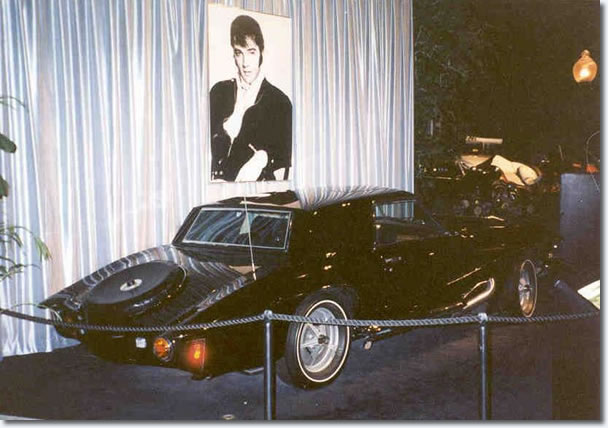 Take a look at the rear windows of both the photo above and below. Only the two prototypes had this large size rear window as in the picture above. The later cars all had a smaller window. You can also see the larger window in the picture of the car at the airport.

Elvis purchased his second Blackhawk, this time a production model on September 8, 1971.

This car was delivered to Elvis on September 9, 1971 at his 144 Monavale Street, Beverly Hills home. The 1971 models were all two seater's with a small jump seat in the back that folded down to accept matching luggage.

In 1972 Stutz switched to a factory GM windshield. The original radio for the 1971 Blackhawk was a Lear Jet AM/FM 8-track, this was the best in car audio money could buy at the time. 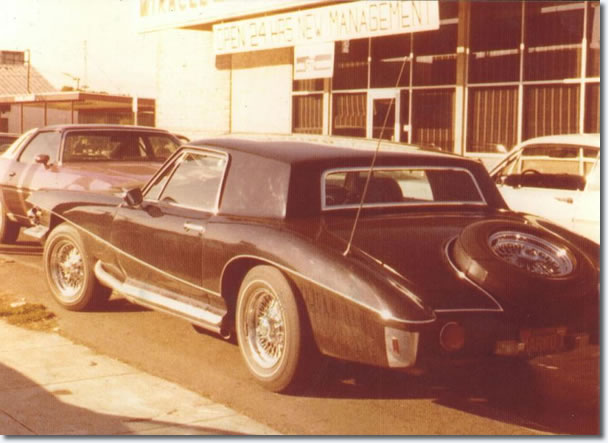 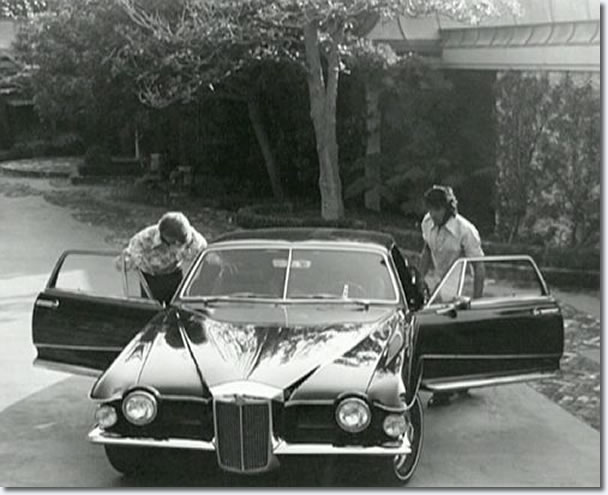 In April of 1973, Elvis made a surprise visit to the Pontiac Dealership from whom he had purchased his first Black Stutz Blackhawk, back in 1970. He saw the new Pearl White Stutz displayed in the showroom window...they proudly showed Elvis the Stutz that was on display. Elvis placed an order for the car, that would be imported from Italy and delivered later that year to his Holmby Hills estate on Monovale Drive in Los Angeles. Elvis' new Stutz was delivered at 4 p.m. in the afternoon. Elvis had just woke up, but he happily agreed to pose for publicity photos with the dealership owner, Jules Meyers. 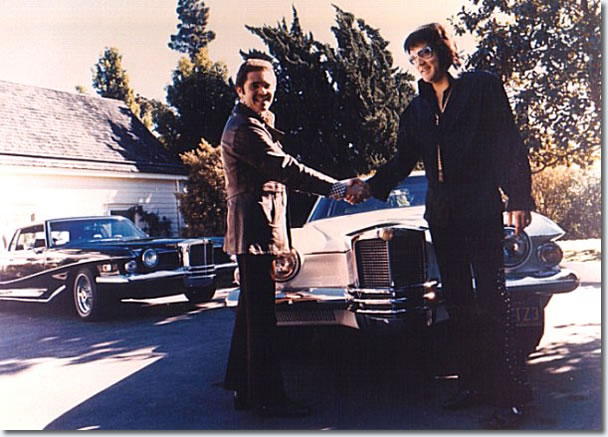 The most famous Elvis Stutz is the 230 HP, 1973 Stutz Blackhawk III, purchased on September, 6, 1974. This Stutz was very unique because it had a red leather interior with 18-karat gold-plated trim throughout.

The 1973 Stutz Blackhawk III was without doubt Elvis' favourite car in the '70s. In fact the last known photograph of Elvis was taken as he was driving though the Graceland Gates in this car shortly after midnight on August 16, 1977, from a late-night visit to the dentist.

With the original lease-contract for this Blackhawk available it was possible to get a copy of the original Pontiac bill. It shows the Pontiac Grand Prix was delivered to Astro Pontiac, where the Stutz Company bought most of the cars that were shipped to Italy, to be converted into a Stutz Blackhawk III. 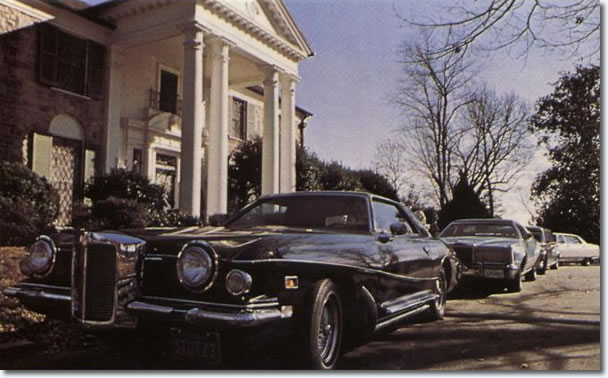 Marty Lacker: Elvis loved that car, and he'd go for rides down Sunset Boulevard in it, sometimes by himself. In California, the times he went riding around were really the only times he was out of the house, except when he was making movies or doing concerts. Sometimes he'd say to one of the guys, 'C'mon and go with me'. But with the Stutz, a lot of times he'd go out on his own. I think he just liked the kick of driving around in that unusual car and showing it off. Especially with the horn. He used to come back and say everybody recognized him in that car because the horn played 'Never on Sunday'. And he'd ride down Sunset and blow the horn at girls.

A rare picture of Elvis in his Stutz - as a passenger!

The last known photograph of Elvis was taken as he was driving though the Graceland Gates in his 1973 Stutz Blackhawk III shortly after midnight on August 16, 1977, from a late-night visit to the dentist. 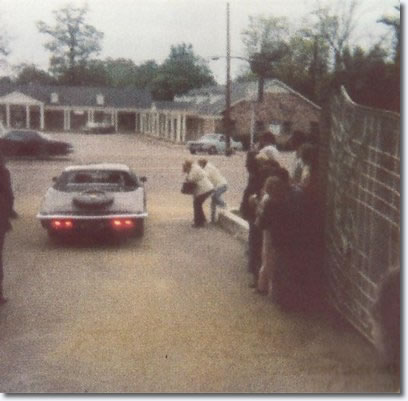 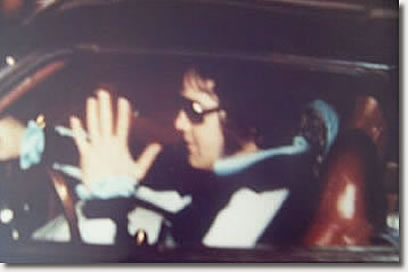 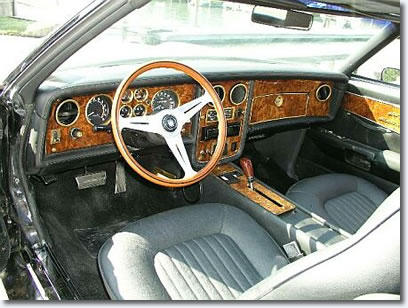 Interior of a 1973 Stutz Blackhawk - Similar to Elvis' car.

The Stutz Blackhawks 'introduced a new concept in motor car luxury and quality'. 'These were no riveted contrivances of mass production. Instead, the Stutz Blackhawk was an engineering marvel - one that spared little in material or craftsmanship - to ultimately express a doubtless statement of opulence and consumption'.

The interior of the Stutz was very luxurious. The floor coverings were made of Australian lambs wool. Twenty four karat gold plates the bezels and moldings. Only the finest European leather covered the seats and was used on the dash. The dash also consisted of beautiful English burl. The Stutz went through a six week long process with twenty-two coats of individually hand rubbed lacquer paint.

The design included a spare tire that protruded through the trunk lid and separate headlights. The interior included gold plated trim and birds eye maple. All early Blackhawks were coupes, but rare sedans were produced later. About 500 Blackhawks had been produced when production ended in 1987. The luxury car was produced from 1971 through 1987.

How many Stutz Blackhawks did Elvis purchase/ own?

As we have shown above, Elvis owned and drove at least four Stutz Blackhawks. We have not been able to establish that he owned five, nor have we found any evidence that Elvis ever gave any of these cars away to anyone. If you can help with information regarding this issue or if you have any further material that would help to complete this story, correct any inaccuracies etc, we would be most happy to hear from you.

We have been contacted by Richard Congelosi who worked for Jules Meyers Pontiac, Inc. Richard was hired in Dec, '69 and had an 'orientation' period to serve, in order to get an automobile sales license, officially he worked at the dealership from January 1970 to June 1974. Richard has provided some new information and pictures, including Elvis' car at the car show in 1970, following this story .........