Elvis kept GI blues to himself

On Monday, Graceland opened a trio of new historical exhibits, including one focusing on Elvis Presley's 1968 Comeback Special, and another called 'Private Presley'. The latter is a mix of famous and rarely seen photos, footage, documents and memorabilia detailing one of the more overlooked chapters in Presley's remarkable life and career, his 1958-1960 stint in the Army.

While Presley was lauded for his service, his tour of duty -- most of it spent in West Germany -- was also a personally difficult time for the singer. His Army obligation threatened the future of what had been a remarkably meteoric career but, more distressingly, Elvis' life was shattered after the sudden death of his beloved mother Gladys in August 1958.

Elvis' years in the Army yielded another significant, and rather more positive, development: his meeting one Priscilla Ann Beaulieu. The daughter of an Air Force officer, she first encountered Elvis when she was just a teen, but their time together in Germany sowed the seeds of a relationship that would culminate in their marriage nearly a decade later.

Here, Priscilla, who recently visited Graceland to look over 'Private Presley', talks about the exhibit, her memories of the era, and a side of Elvis that few knew.

Q: You got a chance to see the exhibit for the first time recently; what was your immediate reaction?

A: I love the display, because that was, of course, a time that I was a part of and it was very emotional for me. You have all these artifacts, photos and pieces of history that we found throughout the years, but when you put them all together and you compile them into a story, it's very different looking at it that way -- more from a historical point of view. We have incredible archivists at Graceland and a great team of people, and they've really created something special.

Q: Looking back, what's the overriding memory of that period for you?

A: I was only 14 years old, and it left such a huge, huge impression on me. It was a very important period of my life being introduced to Elvis at a very young age and living that part of his life with him.

Elvis and I spent many nights talking about him being in the Army and leaving his friends, leaving his family. When I look at some of the photos in the exhibit, I'm a bit saddened. He tried so hard to fit in, tried so hard to do the right thing, tried to do what his country asked him to do. Did he like it? No. And I don't know too many young men who would've been happy to leave their lives and go so far away. Especially for Elvis, it was such a foreign place for him. So to see some of those photos, I see his eyes and I can almost tell you what he's thinking. But in saying that, I feel that it's a piece of history that people should see. To see what an incredible trooper he was -- pardon the pun -- in trying to be the all-around American boy serving his country. 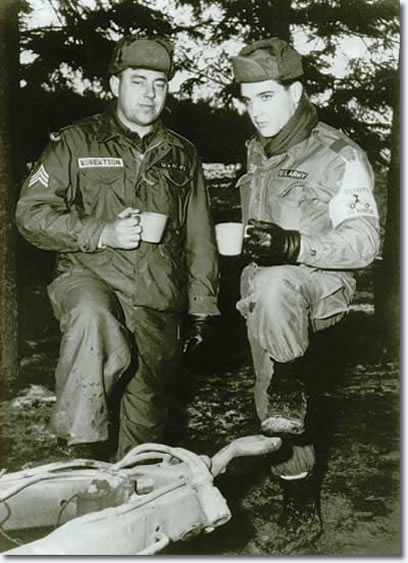 Q: As you suggest, it was a difficult time given the death of his mother and the interruption of his career.

A: Yes, the Army days were a very vital part of his growth, not just going from a kid to an adult, but he came back from Germany a very different person. He didn't have his mother when he came back to Graceland. So, really, I'm left with and reminded of what he went through: the turmoil, the loneliness. And also, the fear of not knowing whether he was going to have a career again, and wondering 'Is it over?' Being away for those two years, he really wondered if people would forget about him. There were many, many nights that a 14-year-old kid sat and listened to the loneliness of a boy, really -- because he was only 23 or 24 years old.

Q: That's interesting, because for most people -- then and now -- they just have the image of Elvis as this indestructible, larger-than-life figure.

A: Absolutely. And I had seen all of his movies too, and had that same sense before I met him. But when you're seeing him play a part or hearing his music, it's different. He was at the top of his game then really, and already iconic at such a young age. If you're watching him on screen or you're listening to him sing, you don't think about the sadness that he felt going through what was a particularly tragic part of his life. So I met him at a very, very vulnerable time. And I feel blessed that I got to know that side.

Q: It seems like Elvis was someone who was also nostalgic in a way, he hung on to a lot of mementos throughout his life that have allowed for exhibits like this one.

A: Very much so, but he gave a lot of things away too. Jewelry, he would give away -- he'd take a ring off and give it to someone in a second. He didn't seem to have as much attachment to material things. It was more personal things. Books that he had read that meant something to him, or letters or presents from fans.

He saved so many things over the years -- especially things from his fans, things they sent him. I don't know of any entertainer who loved his fans as much as he did. He kept scrapbooks, presents that were sent to him, letters, pictures and names of all the people that supported him over the years. And who does that today?

Q: Is there one element or item that stands out for you as far as the material in the exhibit?

A: One thing that did catch my eye was some [footage] of when Elvis was leaving Germany. I rode to the airport with him and in the car he gave me his jacket, which is on display. He told me to keep it and hold onto it for him. He was leaving a piece of him with me. Now, I'm only a kid. I was saying goodbye, never knowing if I was ever going to see him again.

I remember it was snowing when we were at the [airport]. And he said 'When I get to the top of the [plane's] steps and turn around and say goodbye, I don't want to see any sad faces. And I don't want to see any sad faces of you when they take your picture. That's not the memory I want to take back with me'. And I was feeling so torn, wanting to cry, and I remember looking down and then forcing a smile and waving. That was probably one of the most difficult moments of my life.

Then, as he left and I was escorted back to the terminal, there were about a thousand photographers there. And I just tried to smile and look happy because I was thinking if there's one shot of me looking sad, that was the one that would be shown. So when I see that footage, and the display, it's so incredibly emotional, I'm just really taken all the way back to that moment.

My Life With and Without Elvis Presley : For the First Time ... Priscilla Tells All : August, 1973

Elvis and Priscilla Beaulieu Getting Married

Priscilla Presley video photo album with 'My girl' By the Temptations as soundtrack.

Lisa Marie Presley gave birth to twin girls on Tuesday, Oct. 7. The baby girls, have been named Harper Vivienne Ann Lockwood & Finley Aaron Love Lockwood and were delivered by Caesarean section 2:46 p.m. and weighed in at 5 lbs., 15 oz. and 5 lbs., 2 oz. The girls are the first children together for Lisa Marie and husband Michael Lockwood, a musician (Married in Japan January 2006). Lisa Marie, who proudly displayed her baby bump in the September issue of Marie Claire, has a daughter Riley Keough, 19, a model, and Benjamin, 15, with ex-husband Danny Keough. The names acknowledge Elvis (Aaron), Gladys (Love) and Priscilla (Ann).

Lisa Marie Presley takes her little princess for a spin around Hawaii : February 22, 2011

Interview with Gladys and Vernon Presley

Photos of Vernon and Gladys Presley

Elvis By The Presleys DVD

For more information on Elvis and Priscilla buy the Elvis By The Presleys DVD -- at over 4 hours this double DVD set will tell you everything you want to know and more plus includes lots of home movies of Elvis, Priscilla and Lisa Marie. A must for every fan! -- Also there is Priscilla's book -- Elvis & Me.